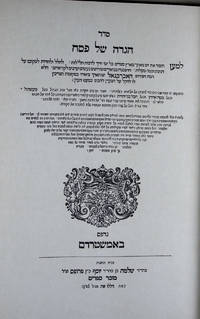 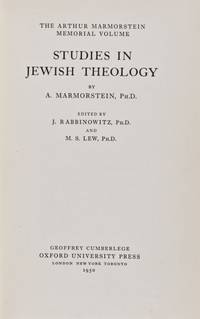 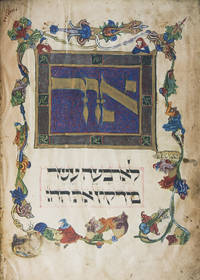 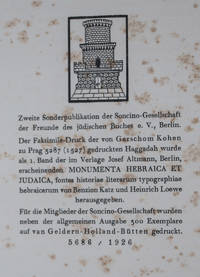 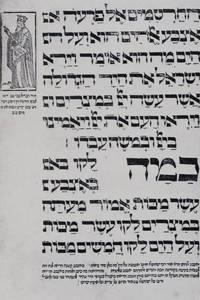 The Earliest Illustrated Haggadah. Printed by Gershom Cohen at Prague 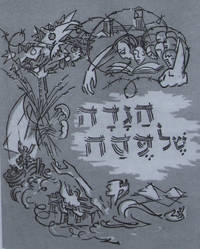 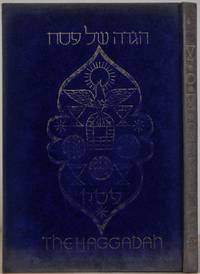 First Edition
THE HAGGADAH OF PASSOVER. A Faithful English Rendering by Abraham Regelson.

Each April, when Passover occurs, Jews all over the world join with family and friends to celebrate the occasion (this year from April 22-30) with a seder, a ritual meal that marks the beginning of the holiday and which involves retelling the story of the Jews’ liberation from slavery in ancient Egypt, a story taken from The Book of Exodus. The instructional guide to the stages of the feast (besides reciting the narrative of Jewish liberation there are also prayers, songs, and commentary) is called the Haggadah (plural: haggadot).

There is some dispute as to when the first haggadot were compiled, but most scholars agree that it was somewhere between 150 and 350 CE and that it achieved a fairly standardized form by the time of Maimonides in the 12th century (Maimonides included a version of the Haggadah in his Mishneh Torah (Jewish laws), although there were variations, depending on whether one was an Ashkenazi, Sephardic or Misrahi Jew, and over the ensuing centuries, with the rise of Orthodox, Conservative and Reform Judaism, there were many versions, some of the most wild of which, like Arthur Waskow’s Eldridge Cleaver-inspired Black Liberation Haggadah from 1970, rework the original narrative to stand as a metaphor for oppressed peoples everywhere throwing off their masters’ shackles.

Early on, the Haggadah became a source and setting of artistic and illustrative inspiration, most likely because of the compelling elements of the story – the Pharaoh is harsh and uncompromising, and even though Moses warns him of the terrible plagues that will come unless he releases the Jews from bondage, he ignores the threat: it is not until the last punishment, when God passes over in the night and kills each Egyptian firstborn, that Pharaoh finally relents. It is one of the most vivid Old Testament moments, embodying all the insoluble moral quandaries regarding punishment and justice.

The Haggadah also includes instructional passages of resonant psychological and educational interest: four questions about the nature and reason for such a seder are asked by four types of kids: the smart one, the evil one, the stupid one, and the one who “knows not what to ask.” How each child is addressed can often lead to intense discussions at the table, regarding education, psychology, and judgment.

The first separate haggadot were in illuminated manuscript form, and there are several standout examples from 14th century Spain. The first printed Haggadah was published by the Soncino family in Lombardy, 1486. By the end of the 18th century there were hundreds of printings of the Haggadah and by the end of the 19th century, well over 1200 separate editions of the Haggadah had been printed since Soncino’s time.

There are only a few books that have such resonance and metaphoric depth that they invite and inspire many artists across the centuries to illustrate them and to make a visual representation of the text. The Rubaiyat of Omar Khayam is one such book; Alice’s Adventures in Wonderland is another, and the Haggadah is also one of the most illustrated texts of all time.  In the 20th century, there were published a number of great editions of the Haggadah that are considerably enhanced by their illustrations.

Considered by many to be the greatest Haggadah ever published is the Arthur Szyk illustrated edition published by the Beaconsfield Press in London in 1939, first in a limited edition of 125 on vellum.  Szyk, a Polish miniaturist, worked on the illustrations throughout the mid-1930s (he produced 48 separate watercolor and gouache illustrations that incorporated the Hebrew text in calligraphy), and his work echoes the great illuminated manuscripts of medieval times but also contained elements of political caricature, which he later made use of in his The New Order, a satire of Nazi life; in fact, Szyk’s calling attention to the Pharaoh/Hitler connection was considered so controversial that he could not secure a publisher in mainland Europe. Another less limited edition came out a year later in London and was hailed as one of the greatest publishing achievements of all time. In 1956, the Szyk Haggadah saw republication in Israel, in a velvet binding, and that edition (or one of the many Israeli reprints, often fancily bound in velvet and metal) is much more easily obtained than the original edition, which brings upwards of $35,000 at auction these days.

Another wonderful edition, very different in conception and tone from Szyk’s, is the Ben Shahn Haggadah, first published in a limited edition in Paris by the Trianon Press in 1966 (and in a trade edition by Little, Brown, shortly thereafter). Shahn, a Lithuanian-born artist who was very much a lefty in his politics, first started working on the illustrations in the 1930s, invoking, according to him, childhood memories of his own family’s seders, and the majestic and communal rituals of those times.

Although also a lefty, Saul Raskin’s edition of the Haggadah from 1941, offers still another perspective. Born in the Ukraine, Raskin immigrated to the United States in 1904 and found employment doing cartoons and caricatures at several Jewish and Yiddish-language newspapers and journals. He was a socialist and Zionist and identified himself as a Jewish artist, but his training as a caricaturist never deserted him and his complex line drawings give his work a vitality and energetic presence that makes the Exodus narrative have a spontaneous and eyewitness feel.

The tradition continues. Recent editions published in Israel featuring work by artists “Shuki” Freiman, Eliyahu Sidi, and Yael Hershberg, prove that the Haggadah and the Exodus story still can inspire illustrators and printers to do something a little different and keep on innovating. One wonders what new form the Haggadah will take, “next year in Jerusalem.”

Our members list new acquisitions and recently cataloged items almost every day of the year. Below, you'll find a few highlights from these recent additions... The Antikamnia calendar 1899 by ANTIKAMN... [more]