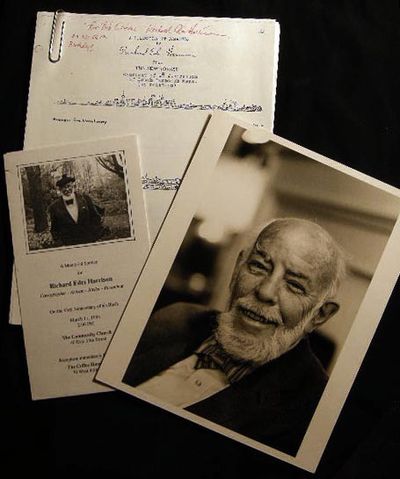 by (Americana - Cartography - Richard Edes Harrison)
New York, New York: Photo By Bill Ray, 1984. Black and white photograph, 8" x 10" on heavy photographic paper; on back is handwritten "For my old and valued friend Bob Greene" and with Harrison's name and the date of April 1984 at the lower border; with the studio stamp of Photo by Bill Ray 350 Central Park West New York. (with) A group of copy-pages of drawings from the New Yorker by Harrison and presented "for Bob Greene Richard Edes Harrison on his 66th Birthday" (with) the black and white illustrated memorial service pamphlet for R. E. Harrison (1901 - 1994) Cartographer-Artisan-Birder-Raconteur on the 93rd Anniversary of his Birth March 11, 1994. in good condition. Robert S. Greene (1922 - 2013) American writer, jazz musician, documentarian and historian, friend of the artist, who innovated U.S. cartography in the 20th century. (see Timothy Barney, "Richard Edes Harrision and the Cartographic Perspective of Modern Internationalism" U. of Richmond 2012 for his more on his contributions to cartography). Photograph. Soft Cover. Very Good. (Inventory #: 24561)
$250.00 add to cart or Buy Direct from Certain Books
Share this item
Certain Books
Offered by