Symptoms of Being Amused Vol. 1 [all that was published] 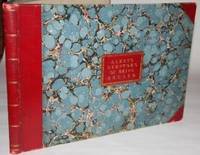 by Alken, Henry
London: Thomas McLean, Repository of Wit and Humour, 1822. First edition. Half Morocco. Very Good Plus. Oblong, 25 by 36 cm. Title page, with hand-colored illustration, preface, and 41 comical Alken hand-colored plates. And bound in are the seven original wrap covers for the work, which was issued in six installments. These are all dated 1824, yet the plates themselves all bear the date of 1822. Each of the plates, not including the title page, has several vignettes, each with its own captions. These range from two to six vignettes, with four being the most common number per plate. Yet the several illustrations on a single plate work together, not only generally with a thematic cohesion, but a careful juxtaposition which produces a visual excitement and liveliness, accentuating the sense of movement so much a part of these drawings. Equestrian humor is the most salient aspect of the illustrations, as one would expect from Alken, but other sports and activities are sources of the fun as well. Tooley 57. Rebacked in a period correct red morocco. Marbled boards, with paper later but also sympathetic. Light to moderate shelfwear to corners and edges. Finger soiling in margins of some plates. A few repaired closed tears. Bookplates of Joseph E. Widener and two other prior owners.