A SIGNED LETTER FROM MAJOR GENERAL CLAIRE L. CHENNAULT, RET.TO A FAN, ON HIS CIV 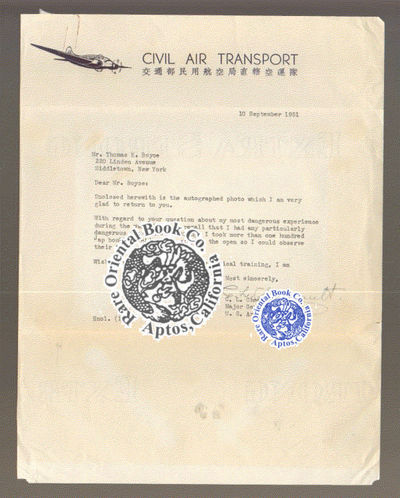 
A GROUP OF TWO RARE ITEMS


This is a very RARE letter signed by Major General Claire L. Chennault, Retired. Signed Chennault items are exceptionally rare and seldom surface.
Chennault was the leader of the "A.V.G." ["AMERICAN VOLUNTEER GROUP"] later to be known as the "FLYING TIGERS."


THE GROUP:
a. CONTENTS OF THE LETTER: Chennault acknowledges the request of the sender from New York, Mr. Boyce to sign a photograph that was sent to Chennault.
Then Mr. Boyce asked Chennault to talk a bit about his "most dangerous experience during the war" [World War II in China].
Chennault answers: "With regard to your question about my most dangerous experience during the war, I cannot recall that I had any particularly dangerous experiences although I took more than one hundred Jap bombing raids -usually in the open so I could observe their tactical methods."
Chennault says: "Wishing you every success in your medial training, I am Most Sincerely, signature of Chennault C.L. Chennault Major General, Retired U.S. Army"

CONDITION OF THE LETTER: The letter is by and large very clean, solid and folded twice. There are three corners that are lacking a very tiny part of the paper, please see a photo posted to our website if any questions. Otherwise the letter is clean, a bit of old 'toning' to the lower folded area.

b. THE AIRMAIL ENVELOPE: The envelope addressed to Mr. Boyce in New York shows a typed "C.L. Chennault, Maj. Gen. Retired." Then "CAT INCORPORATED" is printed on the envelope, followed by a typed: "Taipeh, Taiwan" all in the upper left corner. There are two 200 Taiwan dollar stamps in the upper right corner, with a round date and "Taipeh" stamped. In the lower corner are typed: "SD-22 5M 11-50." The envelope is in excellent condition.

This is a superbly fascinating letter from Chennault. Although he actually flew on several personal combat missions, chasing Japanese Air Force airplanes, he dismisses this with a cavalier gesture and focuses on his standing in the open on an airfield either in Kunming or Guilin, where he commonly studied the Japanese Air Force tactics while his air base too incoming Japanese bombing !

CIVIL AIR TRANSPORT [CAT] [Taiwan]: CAT was created by Claire Chennault and Whiting Willauer in 1946 as Chinese National Relief and Rehabilitation Administration (CNRRA) Air Transport. CAT was the personal company of Chennault and his Chinese wife, Anna [Chen Xiangmei] a young reporter for the Central News Agency whom he married on December 2, 1947. She became one of the Republic of China's chief lobbyists in Washington, D.C.
Chennault, who, unlike Joseph Stilwell, had a high opinion of Chiang Kai-shek, advocated international support for Asian anti-communist movements. Returning to China, Chennault purchased several surplus military aircraft and created the CIVIL AIR TRANSPORT [CAT]. This company was later known as "AIR AMERICA" after its purchase by the CIA, that supported United States covert operations throughout East and Southeast Asia.
By 1950, following the defeat of Chiang's forces and their retreat to Taiwan, the airline faced financial difficulties. The CIA formed a private Delaware corporation called Airdale Corporation, which formed a subsidiary called CAT, Inc. The subsidiary corporation purchased nominal shares of the Civil Air Transport. CAT maintained a civilian appearance by flying scheduled passenger flights while simultaneously using other aircraft in its fleet to fly covert missions.
These surplus aircraft facilitated aid to Nationalist China during the struggle against Chinese Communists in the late 1940s, and were later used in supply missions to French forces in Indochina and the Kuomintang occupation of northern Burma throughout the mid-and late-1950s, providing support for the Thai police force. This same force supplied the intelligence community and others during the Vietnam conflict.
Chinese Civil War[edit]During the Chinese Civil War, under contract with the Chinese Nationalist government and later the Central Intelligence Agency, CAT flew supplies and ammunition into China to assist Kuomintang forces on the Chinese mainland, primarily using C-47 and C-46 aircraft. With the defeat of the Kuomintang in 1949, CAT helped to evacuate thousands of Chinese to Taiwan.

In 1951, retired Major General Chennault testified and provided written statements to the Senate Joint Committee on Armed Forces and Foreign Relations, which was investigating the causes of the fall of China in 1949 to Communist forces. Together with Army General Albert C. Wedemeyer, Navy Vice Admiral Oscar C. Badger II, and others, Chennault stated that the Truman administration's arms embargo was a key factor in the loss of morale to the Nationalist armies.
Chennault advocated changes in the way foreign aid was distributed, encouraged the U.S. Congress to focus on individualized aid assistance with specific goals, with close monitoring by U.S. advisers. This viewpoint may have reflected his experiences during the Chinese Civil War, where officials of the Kuomintang and semi-independent army officers diverted aid intended for the Nationalist armies. Shortly before his death, Chennault was asked to testify before the House Un-American Activities Committee of the Congress. When a committee member asked him who won the Korean War, his response was blunt: "The Communists." The above 3 paragraphs extracted from Wikipedia, see below for more references.

Specializing in Far East: China, Japan, Korea, Taiwan, South East Asia: Vietnam, Cambodia, Laos, Siam, Singapore, Philippines & most all other areas there in. Important, RARE and obscure books our specialty, Please register at our website for free color-illustrated e-catalogs of your choice of collecting interests. Want lists welcomed. We reward our loyal customers with promotions, discounts and special sales offers.