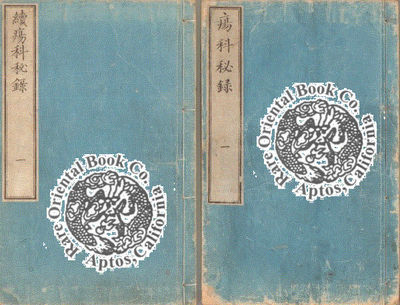 
A FAMOUS AND EARLY WORK ON TUMOROLOGY

A RARE AND COMPLETE SET OF 17 VOLUMES: YOKA HIROKU together with the Supplement: ZOKU YOKA HIROKU. An important medical text on recognition & treatment of anthraces [carbuncle, or tumors].

THE COMPLETE SET: This set title was commonly catalogued by bibliographers as a 10 vol. set bound in 12 fascicles. This is correct for the first part of the title series. The second part, the supplement contains additional volumes, numbered 1-5.
The first part was published in 10 volumes in 1847, the supplement in 5 volumes, published 1859. It is not difficult to see how these two parts published at different times were not always put together by bibliographers. This work is now considered complete in 17 bound parts, consisting of 15 numbered volumes, including the supplements.

HOMMA GENCHO [1804-1872]: The celebrated physician HOMMA used several "Go" [studio names]: Kiyokuken, Sohken & Sukaki, he was popularly known as Gencho.
Homma was a Rangaku-sha [student of Dutch learning] who studied under the famous Dutch physician PHILIPP FRANZ VON SIEBOLD, who lived on Deshima Island in Nagasaki bay.
Mestler devoted more than a page to Homma and this book, stressing the importance of the book, illustrations and the author.
Homma was one of founders of modern medicine in Japan, who was from the Mito Han-I. In the clan he was a surgeon and served the feudal lord of Mito [just outside of Edo or today's Tokyo].
Homma performed early vaccination in Mito area, at a time when this was largely unknown. Homma was a pupil of Hanaoka, a famous physician an author of medical treatise.
Fujikawa stated about this work: "...splendid...caused a rise in Japanese surgery." See below, p.58
Homma did an amputation of a thigh on a patient with gangrene in 1857, in 1858 did a lateral operation for stone and other difficult procedures including extirpation of varicocele with success." Fujikawa p.58 and illustrations in GALAXY, p.139.
Mestler stated: "...Japanese surgeons of more than a century ago, often employed the burning of moxa to cauterize certain kinds of external tumors...and a series of colored wood-block prints showing that practice in a particular case, with the successive state in the treatment. A timorous excretion [?] from the uterus was described and figured as was an almost fantastic tumor [sarcoma] of the scalp "like an 'open flower,' of an incurable type." GALAXY plate IV, figure C.
Other very unusual color illustrations show a human with "a kind of tumor in the form of a tail, like a dog's," and a "bloody tumor [hemangioma] of the knee, having some part hard and some part soft, with blood vessels seen like a snake" [the treatment of the latter tumor was by burning with a heated iron]. A "stony tumor" [calculus?] found in the urine of a female, but sometimes also found in the walls of the vagina or uterus or bladder, was described and illustrated.
Many unusual and fascinating illustrations: "...bubos, carbuncles, tumors of the skin, mammary cancer, atesia of vagina and anus, hemorrhoids, urinary and fecal retention, gonorrhea, chancre, micro-penis, impotence & polydactyly..."
There is also a section on dermatology and description of dental surgery instruments, as well as color illustrations of surgical instruments, suturing, bandaging &c.

THE ILLUSTRATIONS: This work is lavishly illustrated, with a good number of color pages showing in much realistic detail the maladies and illness of early 19th century Japanese. There are also a substantial number of expertly executed line drawings.

CONDITION: The set is uniformly bound in the original blue covers with title slips.
The front cover of vol.1 is a bit dusty & minor soiled, with a stain. The back cover and the other covers are by and large clean, with the usual minor scuffing to the corners & extremities. There is a small white label on each front cover at lower right, with numbers. Overall this is a very nice, clean set, solidly bound and stitched. The set has very wide top margins, as issued and was not trimmed.
The contents are bright and clean, with some minor old worming: vol.I: the last few pages upper margin vol.II-III none vol.IV [part 1]: front cover and first few & last few pages, a bit of the back cover
vol. IV [part 2] center 1/3 of lower margin vol. V, VI [part 1] none; vol. vol. [part 2] a bit on upper margin vol. VII a tiny bit in upper margin vol. VIII [part 1] center a few pages vol. VIII [part 2] none; vol. IX in the margin of a few last pages vol. X last few pages of publisher's listings, text not affected, a few small holes in margins & on title slip, else solid.
There are a few minor stains mostly in the margins here and there, several cinnabar Hanko [chops or seals] decorate the title pages of a few volumes in the first part only, from previous ownership, which do not detract but add good provenance.
By and large the set is clean, solid and in rather good condition for a book some 170 years old.

NOTE: Plesse inquire at our website we have the above two references in stock.

Willis N. Whitney; NOTES ON THE HISTORY OF MEDICAL PROGRESS IN JAPAN: item #1487, 1488; pp.449, 314, 824, 457. Two variant title examples are cited in this work.
[KURE, S.].: REPORT OF THE MEDICAL EXHIBITION VI CONGRESS OF THE FAR EASTERN ASSOCIATON OF TROPICAL MEDICINE 1925. THE EXHIBITION COMMITTEE OF THE CONGRESS, TOKYO, p.28. number 137.
Y. FUJIKAWA: JAPANESE MEDICINE: p.58, plates 2 & 3; translated by John Ruhrah.
KERLEN, H. CATALOGUE OF PRE-MEIJI JAPANESE BOOKS & MAPS IN PUBLIC COLLECTIONS IN THE NETHERLANDS: p.792, #1877. He lists this as a 12 volume set, 1-16 'kan' or parts. We have see this set in the following format, edition: volumes 1-10 [12 parts bound in 10 volumes], + a supplement of 5 other volumes, numbered 1-5. To us, the complete work consists of volumes 1-10 + supplement of 5 vols. for a total count of 17 volumes in all.
This varies from Kerlen who was a meticulous bibliographer. In fact, we have a set with 17 volumes, which we believe to be the complete set of this title.
Perhaps Kerlen never actually saw the set or its simply a typographical error ? In any case he does not give the collation for the total volumes we have. We think his set was lacking the last volume, #5 supplement. We list this set separately. Please inquire with us.
KSM [Igaku] 7-875-1
SCOPE vol. iv, no.9, Spring 1956. Shows color plates from the 1847 edition.
Hoffman: no. 113.
Kraft vol.4, no. 309
HUARD, Pierre. et al.: LA MEDICINE JAPONAISE DES ORIGINES A NOS JOURS: JAPANESE JAPANESE MEDICINE FROM THE BEGINNING TO THE PRESENT, see figure 69, text p.400..
THE ROLE OF DUTCH MEDICINE IN JAPAN: http://docslide.net/documents/dutch-surgery-in-japan.html

Specializing in Far East: China, Japan, Korea, Taiwan, South East Asia: Vietnam, Cambodia, Laos, Siam, Singapore, Philippines & most all other areas there in. Important, RARE and obscure books our specialty, Please register at our website for free color-illustrated e-catalogs of your choice of collecting interests. Want lists welcomed. We reward our loyal customers with promotions, discounts and special sales offers.

A SIGNED LETTER FROM MAJOR GENERAL CLAIRE L. CHENNAULT, RET.TO A FAN, ON HIS CIV