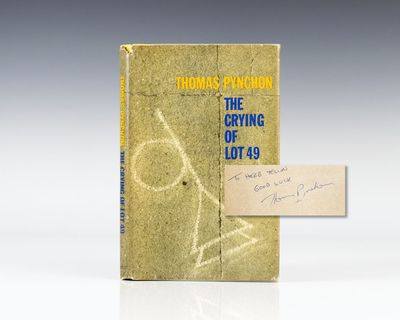 by Pynchon, Thomas
Philadelphia and New York: J.B. Lippincott, 1966. First edition of Pynchon's classic post-modern satire, which tells the wonderfully unusual story of Oedipa Maas. Octavo, original half cloth. Presentation copy, inscribed by the author on the front free endpaper, "To Herb Yellin Good Luck Thomas Pynchon." Fine in a near fine dust jacket with light wear to the extremities. Jacket design by Milton Charles. Housed in a custom half morocco clamshell box. The Crying of Lot 49 is a haunting sequence of imagined human situations, typical and pathetic ones, fused with the particularized power that shows Pynchon's own obsession with the encoded messages of the American landscape. What is also noticeable... is that the major character is really Pynchon himself, Pynchon's voice with its capacity to move from the elegy to the epic catalogue. The narrator sounds like a survivor looking through the massed wreckage of his civilization, 'a salad of despair.' That image, to suggest but one of the puns in the word Tristero, is typically full of sadness, terror, love, and flamboyance. But then, how else should one imagine a tryst with America? And that is what this novel is" (New York Times). (Inventory #: 7204)
$25,000.00 add to cart or Buy Direct from
Raptis Rare Books
Share this item