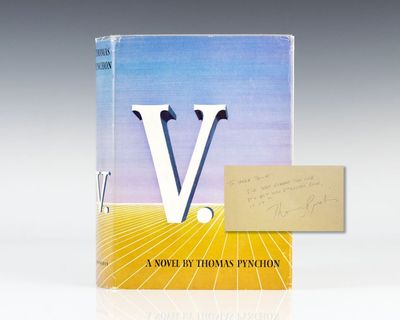 by Pynchon, Thomas
Philadelphia and New York: J.B. Lippincott Company, 1963. First edition of Pynchon's first book. Octavo, original cloth. Presentation copy, inscribed by the author on the front free endpaper, "To Herb Yellin- I've been reading this over. It's not such a terrific book, is it? Thomas Pynchon." Fine in a near fine dust jacket with some of the usual rubbing to the extremities. Jacket design by Ismar David. Books signed and inscribed by Pynchon are notoriously rare. Housed in a custom half morocco clamshell box. After earning his Bachelor's Degree in English from Cornell University, Pynchon was employed as a technical writer for The Boeing Company in Seattle, Washington where he compiled safety articles and newsletters. His experiences at Boeing inspired his depiction of the Yoyodyne Corporation, the fictional defense contractor featured both in V. and The Crying of Lot 49. His debut novel, V. chronicles the exploits of discharged Navy sailor Benny Profane and his reconnection in New York with a group of pseudo-bohemians. Pynchon was critical of the 50s and 60s countercultural movements stating that they "placed too much emphasis on youth, including the eternal variety." V. won The Faulkner Foundation Award for Best First Novel of the Year upon publication in 1963. "V may well stand as one of the very best works of the century" (Atlantic Review). (Inventory #: 7203)
$35,000.00 add to cart or Buy Direct from
Raptis Rare Books
Share this item