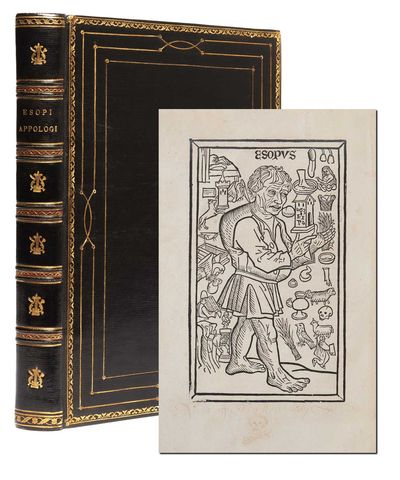 by Aesop, Sebastian Brandt
Basel: Jacob Wolff of Pforzheim, 1501. First edition thus. An early illustrated edition of Aesop's Fables, augmented and edited by Sebastian Brant and the first edition to include his additional 140 sections. Two parts in one volume, folio (leaves measuring 297 x 208 mm). Collates complete, retaining one of the two blank leaves (M6 lacking). Collation identical to the Fairfax-Murray copy: a-b8, c6-o8 (alternately), p-s6 (s6 blank and original); A-B8, C-D6, E8-K6 (alternately), L4, M5, (M6, final blank, lacking). With the famous woodcut portrait of Aesop on the verso of a1 and a smaller woodcut portrait of Brant on the verso of A1 in part two. A total of 335 woodcuts divided into 194 in part one and 141 in part two (inclusive of the portraits). Text in Latin.

Full black straight-grain morocco. Boards ruled in gilt with gilt dentelles. Spine stamped and lettered in gilt. All edges gilt. Marbled endpapers. Generous margins. Previous owner's small bookplate on front pastedown. This copy has been very carefully restored and generally presents quite well. Certain passages were deemed obscene shortly after publication and as a consequence, most known copies have a few sections defaced. This copy is no different with a number of passages and illustrations crossed out and/or marked "no legas" ("do not read"). A number of leaves have had small marginal tears or wormholes repaired, occasionally affecting a letter or a word. One leaf, C4, with a small hole affecting the woodcut on the recto and two or three words on the verso. A few leaves have been remargined, including the title page to part 2 (leaf A1). In two places leaves are bound out of order. The flaws notwithstanding, a lovely book.

The plan of this edition was conceived by Sebastian Brant. The first part of the book is based on Johann Zainer's first illustrated edition of 1476-77, translated into Latin by Heinrich Steinhöwel. Brant expands the work, polishes the language and includes his commentaries to these fables. The second part is an entirely new work by Brant, of 140 fables, riddles, accounts of miracles and other wonders of nature. These 140 new chapters follow the same structure as the first section, with a woodcut followed by verse and then prose, "some of a very remarkable character," according to Hugh W. Davies (Fairfax Murray). These compositions are taken from the works of Stace, Juvenal, Virgil, Ovid, Lucien... The first story, taken from Hesiod, is said to be the oldest known fable.

"The numerous woodcuts in this volume fall into two distinct categories. The woodcuts in the first part (with a few exceptions) are rather simplistic and naive in execution and are based (in reverse) on the woodcuts from Zainer's successful Ulm edition of c.1476 (incidentally the first illustrated edition of Aesop); the actual blocks were first used in Wolff's edition of not after 1489 (Goff A115). The woodcuts of the second part are more sophisticated, with the use of hatching and perspective to enliven the images, and they were cut specifically for this edition; is it thought they were produced by the workshop of Johann Grüninger in Strassburg" (Sotheby's). According to Hugh W. Davies, "The remainder of the cuts are by a new artist, the style entirely differing from the older blocks. These are heavily shaded by thin close parallel lines, amalgamating into a solid mass in the deepest shadows. The perspective as a rule is fair: the faces are well rounded, the noses being broad at the bridge but well-shaped. The cuts have the appearance of metal, but they nevertheless are probably on wood."

In the past 30 years there have been five other auction results for this book (one copy selling twice). The average price achieved in those five sales (including the buyer's premium) is just under $119,000. If we average just the two copies sold in the last ten years, that average jumps to over $167,000. Of those five results, the lowest sale price (from 2002) made over $81,000. And finally, to complete the analysis, a particularly fine copy was offered by the trade in 2014 for 200,000 pounds, roughly $329,000. So, while our copy has its defects and imperfections (as do almost all other copies), it is priced competitively for such a lovely and important work.