AN IMPARTIAL HISTORY OF THE WAR IN AMERICA; FROM ITS FIRST COMMENCEMENT, TO THE PRESENT TIME; TOGETHER WITH THE CHARTERS OF THE SEVERAL COLONIES, AND OTHER AUTHENTIC INFORMATION... 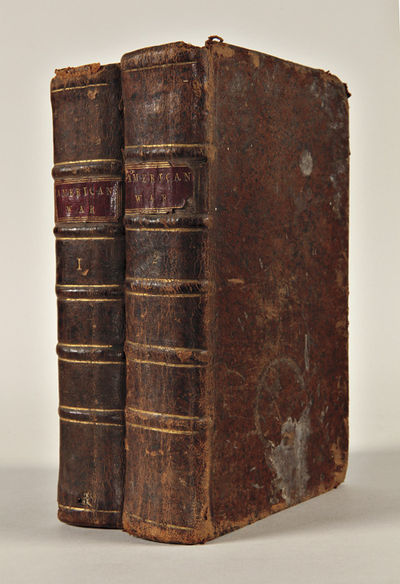 by Murray, Jame
Newcastle upon Tyn: Printed by and for T. Robson, Head of the Groat-Market.., 1782. Two volumes. iv,[5]-152,151-573 (as printed); 576pp., plus twenty-three portrait plates (including the frontis) and one folding plan. Includes extra R1 and R2 leaves in the first volume, but lacks R3 and R4. Contemporary speckled calf, spines gilt, gilt leather labels. Extremities worn, some rubbing to boards, joints tender. Occasional minor foxing, some portraits in second volume with manuscript caricature embellishments. Good plus. The first English edition of Murray's important work on the American Revolution to appear with the slightly-altered title of AN IMPARTIAL HISTORY OF THE WAR IN AMERICA, dropping the "PRESENT' that appeared in all previous editions of the book. The first Boston edition dropped the word the previous year, and the English printers followed suit. The war was coming to a close, so perhaps Murray felt that the work needed a more lasting title, as the Treaty of Versailles brought an official ending to the American Revolution the next year. This also appears to be the last English edition of the work to be printed in the 18th century. The text is similar to the reset sheets of the 1779-80 edition, as it carries the same pagination error at p.152 of the first volume, though the dedication to King George III on p. iv of the first volume here is dated Jan. 25, 1782. Not in Adams. ESTC N7791. HOWES M916, "aa. (Inventory #: WRCAM53345)
$2,750.00 add to cart or Buy Direct from
William Reese Co. - Americana
Share this item

AN ACCOUNT OF LOUISIANA, EXHIBITING A COMPENDIOUS SKETCH OF ITS POLITICAL AND NATURAL HISTORY AND TOPOGRAPHY, WITH A COPIOUS APPENDIX CONTAINING SEVERAL IMPORTANT DOCUMENTS

Newbern, N.C. : Franklin & Garrow , 1804.
(click for more details about AN ACCOUNT OF LOUISIANA, EXHIBITING A COMPENDIOUS SKETCH OF ITS POLITICAL AND NATURAL HISTORY AND TOPOGRAPHY, WITH A COPIOUS APPENDIX CONTAINING SEVERAL IMPORTANT DOCUMENTS)
View all from this seller>