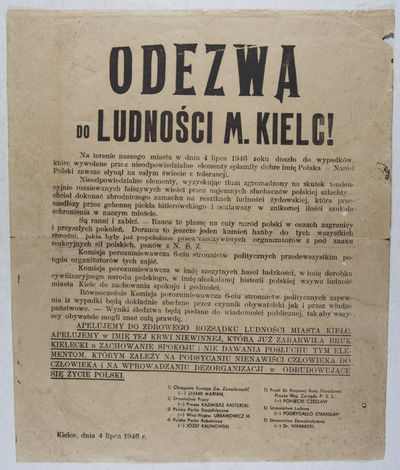 by n/a
Kielce: NP, 1946. First edition. Broadside. The sheet is a 15'' x 12 1/4" broadside printed and distributed on July 5th, immediately following the infamous Kielce Pogrom on July 4th 1946. The appeal for calm and peace in the city was called for by a named group of seven local individuals, each representing predominantly leftist political parties and organizations, hoping for an end to the violence that had been spreading throughout the city during the day. The signatories are Stanik Marian from Local Council of Trade Professionals, Kazimierz Kasterski president of the local Labor Party, Urbanowicz H. of the Polish Socialist Party, Josef Kalinowski of the Polish Workers Party, Ponieki Czeslaw, President of the Board of the People's Party, Podrygallo Stanislaw of the People's Party, and Dr. Winiarski of the Democratic Party.* The Kielc Pogrom occurred on July 4th 1946, and was the deadliest Polish pogrom in the post-W.W. II period, occurring little more than a year after the end of the war. Local police and citizens took part in an attack on Polish Jews who returned to Kielce after the Holocaust and had been living in a building administered by the Jewish Committee of Kielce Voivodeship. Incited by false reports, rumors of a kidnapped child, and stoked by still persistent blood-libel fears, a mob shot and beat over 40 Jews to death. The event caused outrage internationally, and has been seen as one of the determining factors in increased immigration of Polish Jews to Palestine at that time, through the aegis of the Bricha (Brycha) movement. Translation of the text: "Appeal to the Population of the City of Kielce! On July 4th 1946, events took place, caused by irresponsible elements, that stained the good name of [us] Poles, a nation known throughout the world for its tolerance. Irresponsible elements, taking advantage of crowds gathered by false rumors spread by bands hired by Polish gentry, wanted to commit a criminal assault on the Jewish population, that having barely survived the gehenna of the hitlerite hell, wanted to find shelter in our city. There are wounded and killed. This stains our whole polish nation in the eyes of the outside world and of the future generations. It adds one more idea of infamy to all the crimes committed by the [true] organizers from the camp of the reactionary Polish of the ONZ gentry. The cooperative committee of six political parties wants first of all, to condemn the organizers of these events. The cooperative committee, in the name of humanity, in the name of Polish cultural achievements, in the name of the Polish history, appeals to the populace of the city of Kielce to be peaceful and dignified. At the same time, the cooperative committee of the six political parties, assures that the events will be carefully investigated by a citizen organization and the state as well. Results of the investigation will be publicly announced so that all citizens can know the truth. We appeal to the common sense of the people of the city of Kielce, in the name of the innocent blood that colored the streets of Kielce, to maintain peace and not listen to the elements that want to take advantage by encouraging hate of fellow man and interfere in the rebuilding of Polish life." Text in Polish. Paper yellowed from age-toning, and with some spotting. Three small holes and light creasing to the broadside. The paper has been stored folded and has horizontal creasing as a result. Small tape on verso. Paper with a 1/2" tear to the upper right corner, a 2 1/2" closed tear at the left side of the sheet, and some additional closed tears along edges. * See "Kielce - July 4, 1946: Background, Context and Events," page 123. A collective work published by the Polish Educational Foundation in North America, Toronto and Chicago, 1996. Includes the titles "Kielce - July 4, 1946: Background, Context and Events." A collective work published by the Polish Educational Foundation in North America Toronto and Chicago, 1996. Octavo. 151pp. Orange wraps, and the "Bulletin für Faschismus- und Weltkriegsforschung, Heft 29. Thema: Der Pogrom in Kielce am 4. Juli 1946" published by Edition Organon, 2007. Octavo. 168pp. Green wraps. (Inventory #: 41666)
$15,000.00 add to cart or Buy Direct from
Eric Chaim Kline Bookseller
Share this item

The Bible, that is, the Holy Scriptures contained in the Old and New Testament

London : Robert Barker, printer to the Queenes most Excellent Maiestie , 1616
(click for more details about The Bible, that is, the Holy Scriptures contained in the Old and New Testament)
View all from this seller>