The Winding Stair and Other Poems 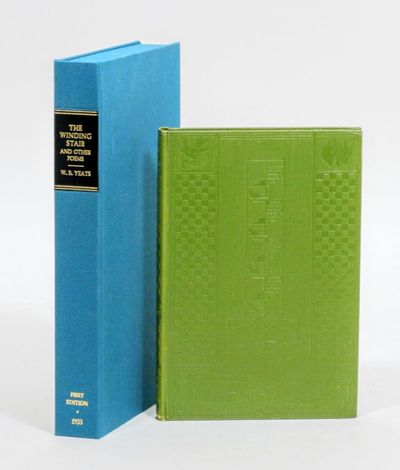 by YEATS, WILLIAM BUTLER
London: Macmillan and Co., Limited, 1933. LIMITED FIRST EDITION. original dust jacket. Very Good/Very Good. FIRST EDITION OF YEATS'S COMPREHENSIVE AND ACCOMPLISHED COLLECTION THE WINDING STAIR AND OTHER POEMS , ONE OF ONLY 2000 COPIES PRINTED. "Yeats is now seen as one of a handful of Irish writers whose influence and example helped create twentieth-century modernist literature in the English language... His huge international reputation is securely based on the mystery and grandeur of his late verse and the poignancy of his love poetry, but he first came to fame as the exotically Celtic poet of a 'new' nationalist Ireland: almost single-handed, he made Irishness culturally fashionable. Spearheading a great cultural renaissance, he moved into his maturity as the voice of his country" (Oxford Dictionary of National Biography).

"Much as he seeks in this long volume, bringing together 64 poems written in the late 1920s and early 1930s, images of order and serenity, he is still drawn to the wild, the dark and the passionate... On the one hand, Yeats is self-consciously inventing new traditions. The "Romantic Ireland" that he once associated with the old Fenian John O'Leary is now located firmly in Coole Park, the home of his friend Augusta Gregory, which is repeatedly used in the volume as the location of an imagined ascendancy.... But, on the other hand there is Crazy Jane, based on an old woman who lived in a cottage near Gort, through whom Yeats speaks in a series of seven poems. She is wild, earthy, reckless, fizzing with the energy of sex and defiance. She reminds Yeats and his readers that Ireland's greatest poet is not yet ready for the sanctity of an honoured grave" (Fintan O'Toole, The Irish Times).

A slim signed limited volume The Winding Stair was issued in 1929, but this 1933 collection, The Winding Stair and Other Poems is regarded as a completely new book. Whereas the 1929 edition contained only six poems, the 1933 collection is Yeats's longest separate volume of verse, featuring 64 poems, including the masterpieces: "Dialogue Between Self and Soul", "Blood and the Moon," "Byzantium," the Coole Park poems, "Vacillation," and two separately titled long sequences ending with the exquisite lyric "From the 'Antigone.'"

Autograph Manuscript Signed [AMS] : Appeal to the Friends of Abolition in England (1833)

London : np , 1833
(click for more details about Autograph Manuscript Signed [AMS] : Appeal to the Friends of Abolition in England (1833))

New York : Alfred A. Knopf , 1923
(click for more details about Harmonium)
View all from this seller>