Plan of London From Actual Survey, 1833 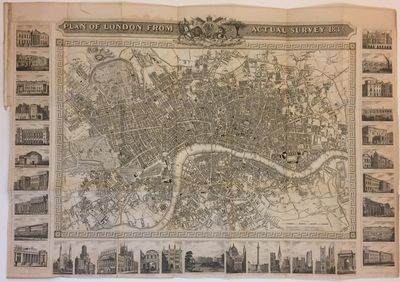 by SHURY, John
London: United Kingdom Newspaper. Map. Steel engraving. Image measures 21.5" x 32". This map of London issued by the United Kingdom Newspaper provides an astounding amount of information about the city in 1833. Making use of the fine detail possible with the new technology of steel engraving, the map meticulously illustrates and labels buildings and streets at a small size, extending south from Regents Park to the Surrey Zoological Gardens and east from Hyde Park to the commercial docks. A decorative geometric border sets the map off from a surround of vignettes depicting 33 of the city's architectural landmarks--including the Bank of England, Lambeth Palace, Covent Garden and Waterloo Bridge--also with remarkable fineness. At the top of the map, the title flanks an elaborate cartouche that combines seals, coats of arms, flags, and other symbols of the British Empire. Such fanfare reveals the scope and power of the city at this point in history, which would only increase in the following decade with the completion of the Thames Tunnel, the worlds first underwater tunnel, shown here under construction. The United Kingdom Newspaper celebrated this achievement by issuing the map free to its readers, an offer also made possible by the highly durable plates of steel engraving.The map is in good condition with some toning, offsetting, and wear to the folds. Small tears in the paper's edges not affecting the image. The print's quality and detail shine through these common signs of wear.John Shury was a British engraver and printer who worked with the publishing firm known as the Society for the Diffusion of Useful Knowledge, or SDUK. This firm was formed in 1826 and published low cost maps with the goal of reaching a large market while still maintaining high quality and precision. (Inventory #: 276922)
$1,250.00 add to cart or Buy Direct from
Argosy Book Store
Share this item