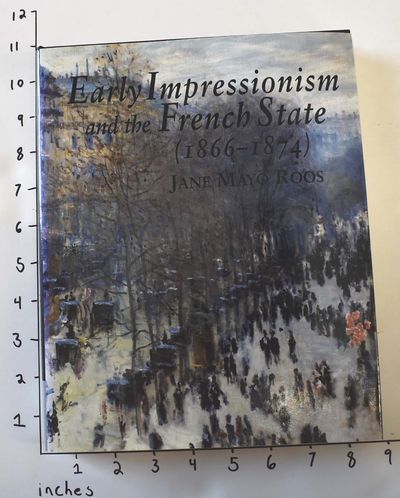 by Roos, Jane Mayo
New York: The Cambridge University Press, 1996. Hardcover. NF/NF but with inscription on title page to former owner (Edgar Joseph Munhall, an American art historian and Curator Emeritus of The Frick Collection) from the staff at Knoedler Galleries (dated 1998).. Black cloth/boards; silver lettering. Color-illustrated dj with white lettering on black spine. xviii, 300 pp. with bw frontis and 152 bw figures. Early Impressionism and the French State explores the reception of modernist painting in the years that preceded the Impressionist exhibition of 1874. Opening with an extensive analysis of the ministry of fine arts and the politics of the Salon, the study considers the Salon experiences of Courbet, Manet, and the group that became known as the Impressionists: Monet, Renoir, Pissarro, Degas, Morisot, Cézanne, and Bazille. This book also examines how art was politicized during the Second Empire and the impact that this had on the interpretation of early Impressionist works. (Inventory #: 162477)
$50.00 add to cart or Buy Direct from Mullen Books
Share this item