In a Blue River 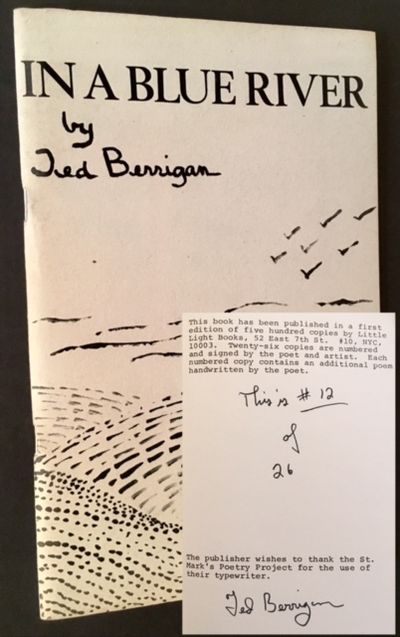 by Ted Berrigan
New York: Little Light Books, 1981. Original wraps. Near Fine. One of Ted Berrigan's scarcest limitations. #12 OF ONLY 26 COPIES ISSUED. EACH NUMBERED COPY IS SIGNED BY TED BERRIGAN AND EACH "CONTAINS AN ADDITIONAL POEM HANDWRITTEN BY THE POET" on the verso of the limitation page. IN THIS CASE, THE POEM IS CALLED "THE D.A." ("Today I had planned to fribble away/in "The Digger's Game"/But chemistry dictated that I lie on the bed/all day too fast to dig/Ted Berrigan"). A very nice copy to boot of this 1981 1st edition. Tight and Near Fine in its stapled, pictorial wrappers, with just a touch of soiling to the rear panel. Octavo, published by Little Light Books of East 7th St. in New York's East Village. (Inventory #: 14325)
$1,250.00 add to cart or Buy Direct from Appledore Books
Share this item
Appledore Books
Offered by