Tenants Rising #8: An official publication of the Berkeley Tenants Union 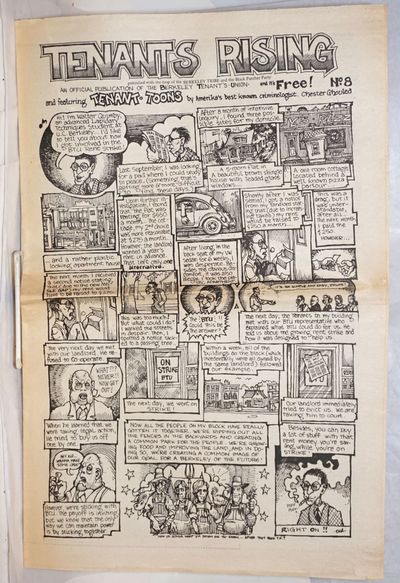 by Irons, Greg (cartoonist)
Berkeley: Berkeley Tenants Union, 1970. Newspaper. 8p., folded tabloid, even toning, very good. Newspaper of the BTU, this issue is most notable for full-page comic strip "Tenant Toons" by UG cartoonist Greg Irons (using alias of Chester Ghouled) on front cover. Rare strip not reprinted elsewhere. Logo notes "published with the help of the Berkeley Tribe and the Black Panther Party," probably referring to use of typesetting equipment and layout tools. Issue is dated to 1970 based on internal evidence. (Inventory #: 217563)
$30.00 add to cart or Buy Direct from Bolerium Books
Share this item