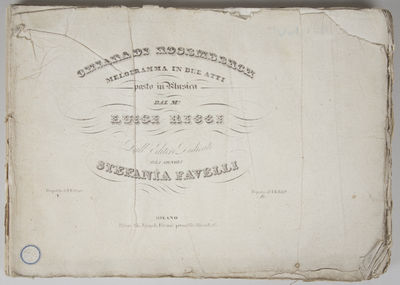 Chiara di Rosembergh, to a libretto by Gaetano Rossi, was first performed in Milan at the Teatro alla Scala on October 11, 1831.

"Luigi Ricci's is one of the more individual voices in Italian opera of the period. His chief gift was for comedy, to which he brought not only a complete mastery of the traditional devices but also a new, robust buffo manner characterized by a wealth of bouncing allegretto melodies, mostly in duple time, and a not infrequent use of folktune... The comic numbers of Chiara di Rosembergh were the most celebrated, but elsewhere there are bold strokes of harmony and rhythm that show an ability to rise to the serious dramatic occasion." Julian Budden in Grove Music Online. (Inventory #: 26898)
$175.00 add to cart or Buy Direct from
J. & J. Lubrano Music Antiquarians
Share this item