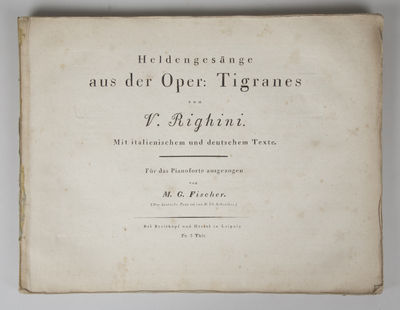 Tigrane, to a libretto by Antonio de Filistri de' Caramondani, was first performed in Berlin on February 3, 1800.

"Righini was mainly an opera composer, moving in the course of his career from opera buffa to opera seria. While little is known about his comic operas, his Berlin operas typify the late Metastasian opera in hybrid Italian-French style that were so much in favour at the Prussian court. The allegiance to Metastasian principles, subscribed to by the court poet Antonio Filistri de' Caramondani, rested on the still accepted view of court opera as representative opera, with its emphasis on ethical models and political allegory. This traditional dramaturgical structure, however, was enriched with elements taken from tragédie lyrique such as action-packed introduzioni, scene complexes, and ballets. Through his use of contrasting tempos and sectionalization in arias and ensembles, and through his dramatic use of instrumentation, Righini followed the tendencies towards heightened drama characterizing opera seria of his time. His ability to combine cantabile melody with rich orchestration was admired by his contemporaries as exemplifying the perfect German-Italian hybrid style." Christoph Henzel in Grove Music Online.

"The Berlin operas represent the peak of Righini's work... [They] were famous in their time and were praised for the way in which they combined expressive, authentically Italian vocal writing with German craftsmanship, but above all for their instrumentation, as in the 'sublime' horn, bassoon and cello trio in Tigrane..." Gudrun Becker-Weidmann in Grove Music Online. (Inventory #: 25900)
$550.00 add to cart or Buy Direct from
J. & J. Lubrano Music Antiquarians
Share this item