THE NEW WIZARD OF OZ. With pictures by W. W. Denslow 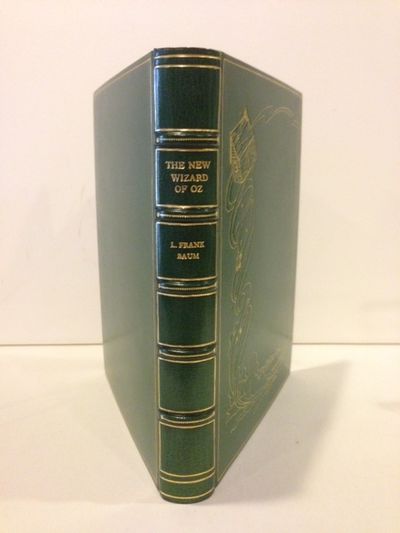 by Baum, L. Frank
Indianapolis [IN]: The Bobbs-Merrill Company, 1903. Second edition, second state, but the first Bobbs-Merrill printing of Baum's first book in the Oz series, originally published by George M. Hill as "The Wonderful Wizard of Oz" in 1900. Square 8vo (8 3/4 x 6 5/8 inches). 259, (2) pp. Color illustrations throughout, including 16 plates. Signed by the author "Very Sincerely Yrs / L. Frank Baum" on a front endpaper. "As the early Bobbs-Merrill printings have substantially the same setting of text as the Hill printings, they are technically part of the same edition. For clarity, however, we have retained the traditional usage 'second edition.' G. Thomas Tanselle whom we cite in the introduction, suggests such printing created from earlier plates but by a new publisher should be considered 'sub-editions.' In which case, this is the first 'sub edition'" (Douglas Greene & Martin and Martin, Haff & David Green "Bibliographia Oziana"; International Wizard of Oz Club, 1988, pp. 28-31). Fine copy in a lovely new binding. In a new design binding: emerald morocco, gilt, the upper cover with an illustration of Dorothy's house being swept up by the tornado (taken from an illustration at the beginning of the first chapter), gilt rules and title between raised bands on the spine, all edges gilt, by the Chelsea Bindery. (9789). (Inventory #: 62043)
$12,500.00 add to cart or Buy Direct from
Bartleby's Books
Share this item