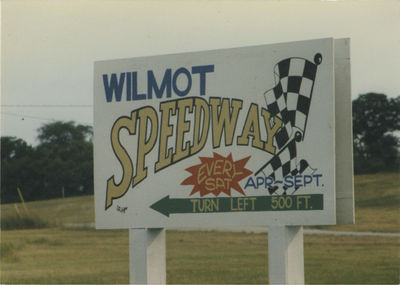 by KOYT, George
Circa 1973-1995. Photographs are uniformly near fine with some notations to verso; organized into 97 packets.. Archive of 418 original snapshots, 5 x 3 1/2 inches, many with notations to verso, documenting 97 racetracks, primarily in the American Midwest, but also stretching from New York State to California. The photographer, one George A. Koyt (1938-2010), apparently spent over twenty years traveling cross-country to myriad small-town racetracks, especially in Iowa, Illinois, Indiana, Ohio, Wisconsin, and Pennsylvania, where 50 of the tracks pictured were located. The unifying aesthetic of the archive is typological strategy; at each track, Koyt photographed the signage, and in the process, created a directory of American Midwestern vernacular graphic design. The photographs have been organized around the signage into packets, some with a single photo, others with up to a dozen additional photographs documenting various aspects of the racetrack, such as crowds and the actual races. Altogether, the archive captures both a homespun graphic language as well as recording a uniquely American popular culture of stock-car and sprint-car racing. (Inventory #: 23167)
$2,500.00 add to cart or Buy Direct from Harper's Books
Share this item
Harper's Books
Offered by