THE TALE OF PIGLING BLAND 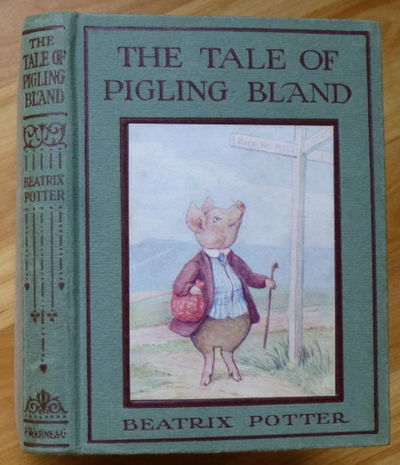 First Edition of the author's nineteenth book, her second title (after THE TALE OF MR. TOD) to appear in the "New Series" that was unfortunately issued in a binding almost as fragile as the earlier titles. THE TALE OF PIGLING BLAND was most probably in Beatrix Potter's mind as early as 1910... This story about Pigling Bland has an element of truth in it, for on November 17th 1909, in one of Beatrix Potter's letters... she wrote "The two biggest little pigs have been sold, which takes away from the completeness of the family group. But they have fetched a good price, and their appetites were fearful -- five meals a day and not satisfied." Both the first and the second printing bear the date 1913 on the title page, and "are believed to be identical" [quotes from Linder]; the third is dated 1914. This copy is grey-green in color; others are in maroon (no priority). This is a handsome, fine copy, with essentially no wear, no soil, and no ownership inscriptions. Linder p. 429; Quinby 22. (Inventory #: 13898)
$575.00 add to cart or Buy Direct from
Sumner & Stillman
Share this item