Capital In the Twenty-First Century. 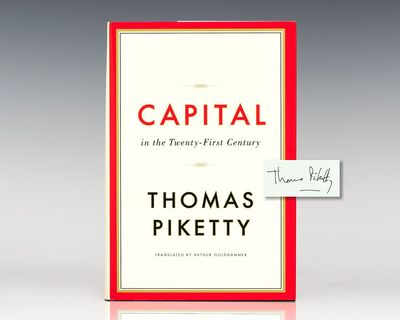 by Piketty, Thomas
Cambridge, MA: The Belknap Press of Harvard University, 2014. First edition of Piketty's magnum opus. Octavo, original boards. Signed by Thomas Piketty on the title page. Fine in a fine dust jacket. Translated from the French by Arthur Goldhammer. "Monumental... [Piketty] documents a sharp increase in such inequality over the last 25 years, not only in the United States, but also in Canada, Britain, Australia, New Zealand, China, India, Indonesia and South Africa, with people with the highest incomes far outstripping the rest of society. The book is impressive in its wealth of information" (Robert J. Shiller New York Times). It went on to win The Financial Times and McKinsey Business Book of the Year, The British Academy Medal Finalist and a finalist for The National Book Critics Circle Award. (Inventory #: 58009)
$425.00 add to cart or Buy Direct from
Raptis Rare Books
Share this item