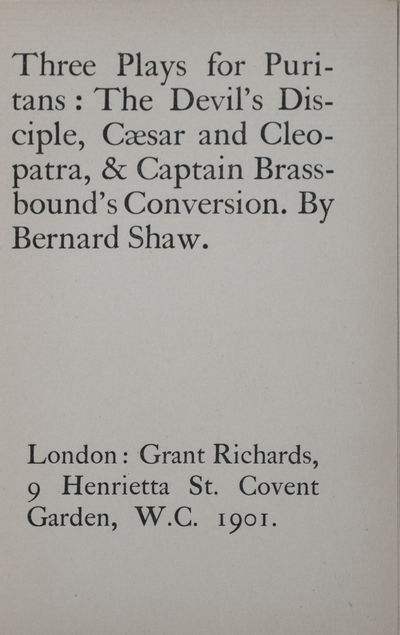 by Shaw, George Bernard
London: Grant Richards/ Archibald Constable & Co, 1926. Ex-Library, First edition. Hardcover. g- to vg. Small octavos. Light green cloth boards with gilt lettering on the spines. Five of the books have a gilt top edge. Pages uncut and/or unopened. This is a collection of 9 first edition copies of plays and collections of other works by George Bernard Shaw, with each in a uniform binding as issued. 7 of 9 have protective mylar jackets. Each was published independently over a twenty five year period from publisher Archibald Constable, except for "Three Plays For Puritans" (published by Grant Richards). Most of books have an lengthy essay at the front, often by Bernard Shaw himself. These take the form of an introduction or preface, discussing in detail, the work, and/or the themes dealt with in the play itself. The contents of the collection are as follows: 1."Three Plays for Puritans" (1901). (xxxvii) (2) 308pp. [Containing The Devil's Disciple (1897), Caesar and Cleopatra (1898) and Captain Brassbound's Conversion (1900)] 2. "Man and Superman. A Comedy and A Philosophy" (1903). (xxxvii) (2) 244pp. (4) + 16 pages of publisher's ads. The play is accompanied by "The Revolutionist's Handbook", a full version of the book published by the character of John Tanner in the play. 3. "John Bull's Other Island and Major Barbara: Also How He Lied to Her Husband" (1907). (lix) (1) 293pp. + 2 pages of publisher's ads. 4. "The Doctor's Dilemma, Getting Married, & The Shewing-up of Blanco Posnet" (1911). (xciv) 407pp. (1) + 4 pages of publisher's ads. 5. "Misalliance, The Dark Lady of the Sonnets, and Fanny's First Play. With a Treatise on Parents and Children" (1914). (cxxi) 234pp. + 2 pages of publisher's ads. 6. "Heartbreak House, Great Catherine, and Playlets of the War" (1919). (xlix) (1) 266pp. + 2 pages of publisher's ads. [Includes O'Flaherty V.C. (1915), The Inca of Perusalem (1915), Augustus Does His Bit (1916), and Annjanska (1917)] 7. "Back to Methuselah. A Metabiological Pentateuch" (1921). (xci) 267pp. 8. "Saint Joan: a Chronicle Play in Six Scenes and an Epilogue" (1924). (lxiv) 114pp. + 2 pages of publisher's ads. 9. "Translations and Tomfooleries" (1926). First Impression. (v) 246pp. + 2 pages of publisher's ads. Some of mylar with some light chips or tears. Some bindings with some light rubbing and bumping to the extremities. Head of the spine of "John Bull's other Island" with some small closed tears. Some spines of the earlier volumes sunned and/or with minor stains. Boards of a few volumes with light smudges and/or water stains. A few spines lightly cocked. A few interiors with ink stamps and/or previous owner's bookplates at the front. "Puritans" with binding starting at the interior back cover. Ocassional starting at a few other pages throughout the collection. Bindings tight overall. Bindings in good- to very good, interiors in good to very good condition overall. (Inventory #: 43103)
$475.00 add to cart or Buy Direct from
Eric Chaim Kline Bookseller
Share this item