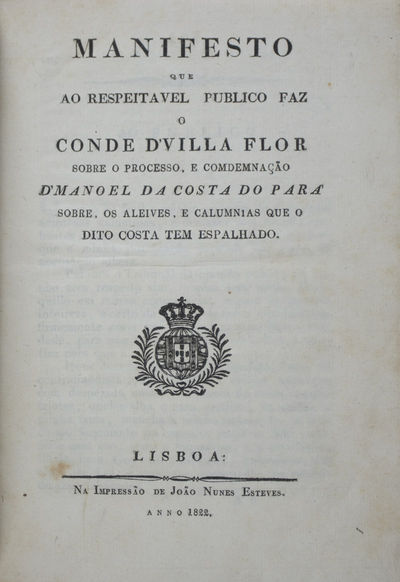 by Conde de Villa Flor (António José de Sousa Manuel e Meneses Severim de Noronha Duque da Terceira)
Lisboa: João Nunes Esteves, 1822. First edition. Hardcover. vg. Octavo ( 7 7/8 x 5 5/8"). 36pp. Late 19th-century half calf over marbled paper covered boards, with gold lettering and tooling to spine. Raised bands. Top paper edge red. Marbled endpapers. Publisher's device on title. Decorative headpieces. Ribbon marker. First edition of this libel published by the author in order to defend himself against charges that he had unjustly detained and imprisoned a resident of Pará (Colonial Brazil) and searched his home for incriminating papers. The whole affair started in 1819, when Governor Conde de Villa Flor (later Duke of Terceira) had attempted to crack down on an illicit trade in diamonds. The accused, in the course of their defense, made counter-accusations against the governor. By publishing in this work the relevant official documents, the author hopes not only to defend himself, but also to clear his good name. Text in Portuguese. Binding and interior in very good condition. About the author: D. António José Severim de Noronha, 1st Duke of Terceira, 1st Marquis of Villa Flor (1792-1860) was a Portuguese military officer, statesman and a leader of the Constitutionalist side in the Liberal Wars, as well as a Prime Minister of Portugal. (Inventory #: 43104)
$350.00 add to cart or Buy Direct from
Eric Chaim Kline Bookseller
Share this item