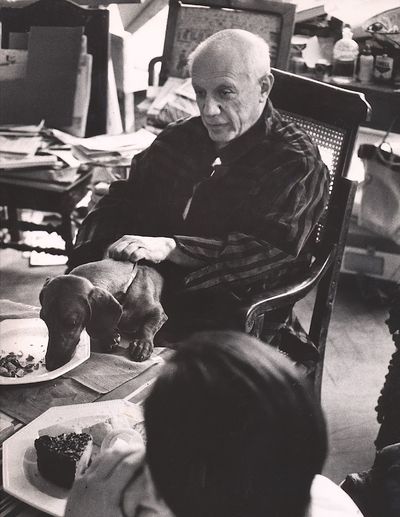 by [PICASSO] DUNCAN, DAVID DOUGLAS
On the suggestion of friend and fellow photographer, Robert Capa, Duncan traveled to France to meet Picasso in 1956. Picasso would become a friend and the subject of seven photographic books. Their friendship lasted until Picasso's death.  Picasso referred to Duncan as his "Ishmael" and Duncan called Picasso "Maestro." With photographs of Picasso and his dachshund taken in 1957, Duncan produced a photographic book  titled, "Picasso & Lump: A Dachshund's Odyssey" published in 2006. Our image is not included in the book. Note: Lump is German roughly translated into English as rascal or rogue.

Pencil docketing on verso identifies the photo as, ""Lumpe V" along with cropping markings. The photograph was printed on fibre based photographic paper, satin finish, and was cut from a standard size 11 x 14 inch paper down to 9 x 13 1/4 inch image. Above Duncan's stamp, crop marks on verso, read, "4 " -- 45 1/2." The back of the head of Picasso's wife, Jacqueline Roque, shows unclearly in the foreground. This may be a reason the photograh was not included in  Duncan's photographic book. Small piece of tape stain from prior framing remains on verso upper right margin.

Duncan was an established war time photographer. Starting in World War II as a young photographer, he covered the Korean and Viet Nam Wars, the 1968 Democratic and Republican Conventions and produced important photo books  covering these events. Autograph (Inventory #: 4347)
$1,250.00 add to cart or Buy Direct from
Schulson Autographs
Share this item


(click for more details about Original Art. Two Drawings of Greenland, pen and ink sketches on one 8.25 x 11 sheet of drawing paper)


(click for more details about AUTOGRAPH LETTER SIGNED two pages on one 8vo sheet, Portsdown Road, Aug. 25, 1854)
View all from this seller>