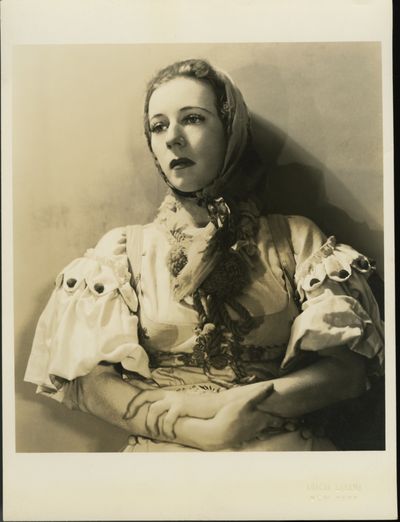 by [DE MILLE] Sunami, Soichi
1930. Vintage silver gelatin cloride photograph, 6 3/4 x 7 7/8 in. [17.2 x 19 cm.] on unmounted photographic paper 7 1/4 x 9 1/2 in. Embossedin blind on under the image "Soichi Sunami - New York" and stamped in ink on the blank reverse, "Please give credit / Soichi Sunami/ Photographer/ Algonquin 4-4043 / 27 W. 15th St. New York." Fine. "Soichi Sunami was a modernist photographer, influenced by the pictorialist movement, and best known for his portraits of early modern dancers, including Ruth St Denis, Agnes De Mille, Helen Tamiris and Martha Graham, with whom he maintained an extended artistic collaboration. Born in Okayama Prefecture, Japan, on February 18, 1885, he emigrated to the United States in 1905. In 1907 he arrived in Seattle, where he worked for photographer Ella E. McBride, who was a fellow member of the Seattle Camera Club (an association largely made up of Japanese-American immigrant photographers) and won three times an award from an art salon hosted by local department store Frederick & Nelson. By 1922, he had moved to New York City, where he briefly worked for photographer Nickolas Muray before enrolling at the Art Students League, alongside classmate Alexander Calder, under the primary tutelage of Ashcan painter John Sloan (after whom he would later name his son). For nearly forty years (from 1930 until 1968) he was the official staff photographer at the Museum of Modern Art (MoMA) in New York City,[2] a position that helped him avoid internment during World War II. His influential friends and admirers included artist Natalie Hays Hammond and MoMA founder Abby Aldrich Rockefeller. He became an American citizen on August 5, 1957, and died on November 12, 1971." - Wikipedia. (Inventory #: 52410)
$250.00 add to cart or Buy Direct from
Andrew Cahan: Bookseller
Share this item
Andrew Cahan: Bookseller, Ltd.
Offered by