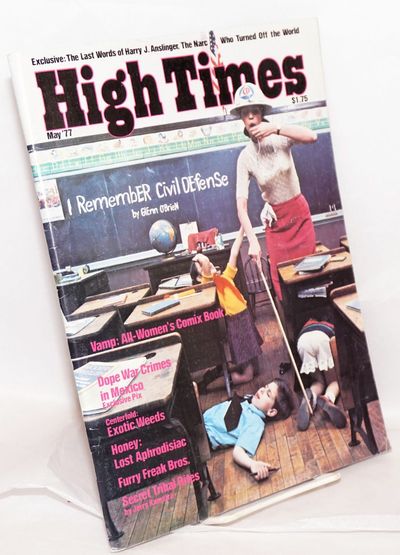 New York: Trans-High Corporation, 1977. Magazine. 114p., 8.25x11 inches, slick magazine, illus., mild toning on some pages, else very good. This issue of the archetypal drugs and counter-culture magazine is most distinguished by containing the 7-page "premier issue" of VAMP: Fantasy and Humor by Women, edited by Terry Richards and designed by Becky Wilson. Originally intended as a stand-alone newsstand magazine, funding ran out before it got off the ground, hence its presence here. Comix by Trina, Lee Marrs, Shelby, Michele Brand, and Ted Richards (Terry's husband), plus racy fiction by Sharon Rudahl and mini-mock book reviews by Deanne Stillman. Also in the High Times issue: a satirical "death bed" interview with Harry J. Anslinger, infamous top Fed Nark. (Inventory #: 217682)
$12.00 add to cart or Buy Direct from Bolerium Books
Share this item