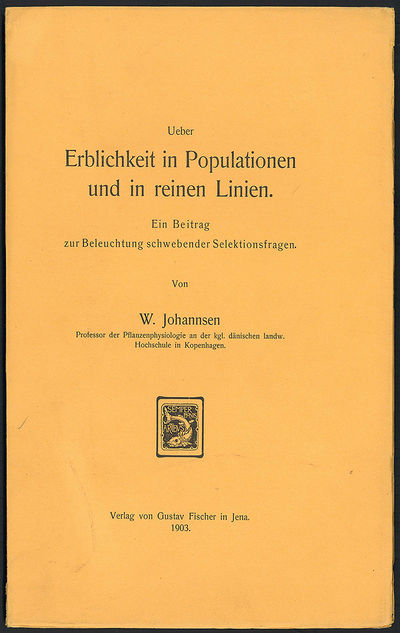 by Johannsen, Wilhelm
Jena: Gustav Fischer, 1903. Johannsen, Wilhelm Ludvig (1857-1927). Ueber Erblichkeit in Populationen und in reinen Linien. [6], 68pp. Text diagrams. Jena: Gustav Fischer, 1903. 242 x 165 mm. (unopened and uncut). Original orange printed wrappers. Fine. The Haskell F. Norman copy. First Edition in German. With his pure line theory, Johannsen proved experimentally that Galton's law of regression to the mean applied only for offspring produced by self-fertilization from a single parent plant, as in peas, beans and other self-fertilizers. Johannsen called the offspring and descendants of such a plant a "pure line," as he believed them to be genetically identical to the parent; therefore, any variation in the offspring of a pure line must be due to non-heritable factors such as environmental change. Johannsen's work provided important experimental evidence for de Vries's mutation theory, as Darwininan selection could not apply in a pure line whose fluctuations were caused only by non-heritable factors. Johannsen's initial results in pure line genetics was published in Danish in the third number of the journal K. Danske Videnskabernes Selskabs Forhandlinger (1903). The present German translation appeared in the same year. Dictionary of Scientific Biography. Garrison-Morton.com 242. Norman 1173 (this copy). . (Inventory #: 44318)
$400.00 add to cart or Buy Direct from
Jeremy Norman & Co.
Share this item
Jeremy Norman & Co., Inc.
Offered by