Report to the House of Representatives of the United States of America, vindicating the rights of Charles T. Jackson to the discovery of the anaesthetic effects of ether vapor . . . Inscribed by Jackson 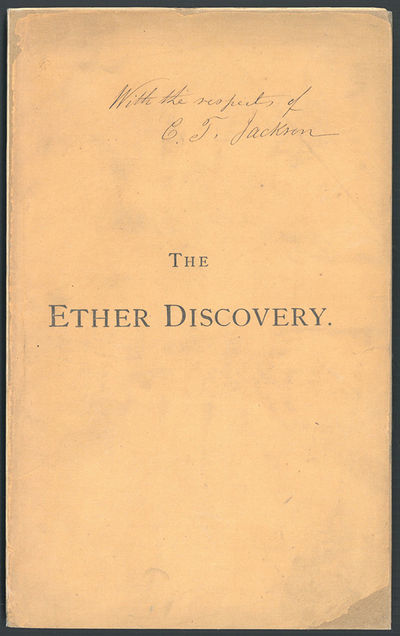 by Jackson, Charles T.
Boston: Rand, Avery & Frye, 1853. [Jackson, Charles Thomas (1805-80).] Stanly, Edward (1810-72) and Alexander Evans (1818-88). Report to the House of Representatives of the United States of America, vindicating the rights of Charles T. Jackson to the discovery of the anaesthetic effects of ether vapor, and disproving the claims of W. T. G. Morton to that discovery. 57pp. [Boston: Rand, Avery & Frye, 1853.] 243 x 151 mm. Original printed wrappers, silked, original spine perished, repairs to edges; boxed. Internally very good. Presentation Copy, inscribed on the front wrapper: "With the respects of C. T. Jackson." Second printing, reproduced by electrotype from the official government publication, with front cover title reading "The Ether Discovery" and "Boston: Electrotyped and printed by Rand, Avery & Frye" on the verso of the title. This report supporting Charles Jackson's priority claim to the discovery of ether anesthesia, long believed to have been written by Congressmen Edward Stanly and Alexander Evans, has recently been discovered to have been written by Jackson himself. It is one of the documents in the "ether controversy," a long and rancorous dispute between W. T. G. Morton and Charles T. Jackson over who deserved the credit for discovering inhalation anesthesia. In late November 1851 Morton, who had hoped to make his fortune from ether anesthesia, made his third petition to Congress for a monetary reward for the discovery. Morton's claims to priority were reviewed by a congressional committee headed by William H. Bissell. The Bissell committee issued a report in favor of Morton, but two dissenting members, Edward Stanly and Alexander Evans, sponsored the present minority report supporting Jackson's priority. It is now known that Jackson, not Morton, was the sole discoverer of the anesthetic properties of sulfuric ether. Jackson was so pleased with the report that he paid to have it electrotyped and reprinted. Fulton & Stanton, Centennial of Surgical Anesthesia, p. 71. Wolfe, Tarnished Idol, ch. 17.  . (Inventory #: 44255)
$1,750.00 add to cart or Buy Direct from
Jeremy Norman & Co.
Share this item
Jeremy Norman & Co., Inc.
Offered by