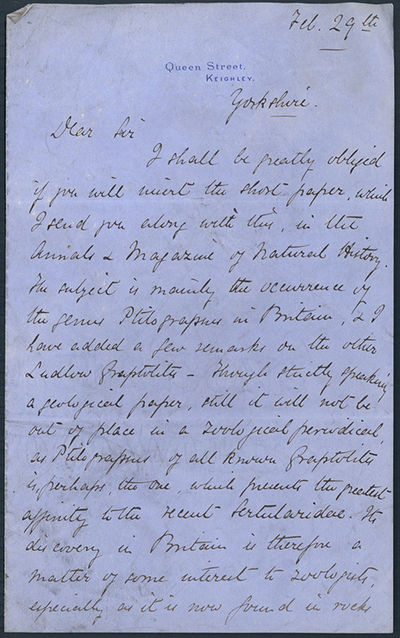 by Nicholson, Henry A.
Yorkshire, 1868. Nicholson, Henry Alleyne (1844-99). Autograph letter signed to Dr. William Francis. 1-1/2 pages. Yorkshire, Feb. 29 [1868]. 201 x 124 mm. Minor soiling but very good. From British paleontologist and zoologist H. A. Nicholson, specialist in fossil invertebrates and author of Ancient Life-History of the Earth (1877), Manual of Palaeontology (1872) and numerous other scientific books and papers; to Dr. William Francis, co-founder with Richard Taylor of the publishing firm Taylor & Francis. In the letter Nicholson asks Francis to accept one of his papers for publication in the Annals and Magazine of Natural History, Zoology, Botany and Geology, a scientific journal co-edited by Francis and published by Taylor & Francis: ". . . The subject is mainly the occurrence of the genus Ptilograpsus in Britain, & I have added a few remarks on the other Ludlow Graptolites—Though strictly speaking a geological paper, still it will not be out of place in a zoological periodical, as Ptilograpsus, of all known Graptolites is, perhaps, the one which present the greatest affinity to the recent Sertularidae. Its discovery in Britain is therefore a matter of some interest to zoologists . . ." Nicholson's paper, titled "On the occurrence of the genus Ptilograpsus in Britain; with notes on the Ludlow graptolites," appears on pp. 238-241 of the Annals' first volume, issued in 1868. Graptolites are a group of extinct marine colony-forming animals that existed from the Cambrian to the early Carboniferous periods (524 to 318 million years ago); their fossils are useful for dating geological strata. . (Inventory #: 44375)
$300.00 add to cart or Buy Direct from
Jeremy Norman & Co.
Share this item
Jeremy Norman & Co., Inc.
Offered by