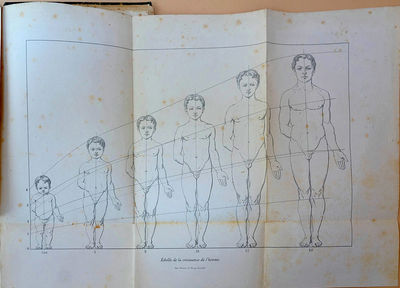 by Quetelet, Adolphe
Brussels & Paris: C. Muquardt; J. Baillière, 1871. Quetelet, Lambert Adolphe Jacques (1796-1874). Anthropométrie ou mesure des différentes facultés de l'homme. 8vo. [7], 6-479pp. 2 folding lithographed plates; wood-engraved text illustrations. Brussels: C. Muquardt; Paris: J. Baillière & Fils, 1871. 250 x 167 mm. 20th century half cloth, paste paper boards, original printed rear wrapper bound in, front hinge cracked and first signature starting. Minor foxing and toning but a good copy. First Edition, version with 1871 title-page. In this work and in his Physique sociale ou essai sur le developpement des facultés de l'homme (1869), Quetelet established the basis for mathematical study of anthropological data. "Quetelet showed that if a series of anthropological measurements of either physical or intellectual qualities were plotted on squared paper, allowing x to be the measurements and y to be their frequency, they formed a curve like that representing the expansion of the binomial, or like that formed by plotting the errors of a great number of observers [i.e., the Gaussian curve]" (Penniman, p. 105). By applying the mathematics of the Gaussian curve to anthropological data, it became possible to plot the average or "standard" deviation from the statistical average, and thus to interpret anthropological data with greater exactness. In our 1991 catalogue of the Haskell F. Norman library, we had stated that there were two Brussels editions of Quetelet's work, published by C. Muquardt in 1870 and 1871. OCLC shows both the 1870 and 1871 versions of Anthropometrie to have identical collations, and we now believe that the 1870 and 1871 versions represent different states or issues. Garrison-Morton.com 171 (citing 1870 version). (Inventory #: 44283)
$950.00 add to cart or Buy Direct from
Jeremy Norman & Co.
Share this item
Jeremy Norman & Co., Inc.
Offered by