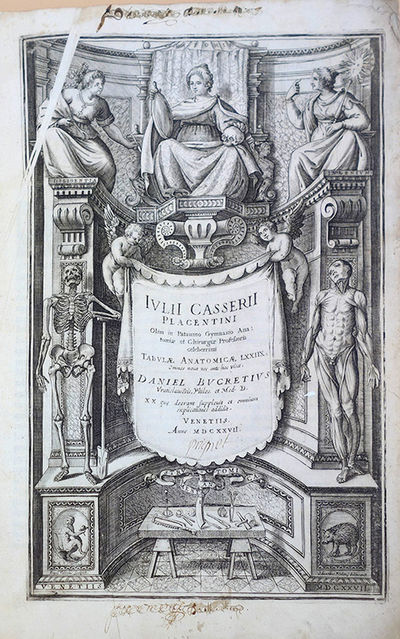 by Casserio, Giulio; Spigelius
Venice: Deuchinum, 1627. Casserio, Giulio (1561?-1616) Tabulae anatomicae LXXIIX . . . Daniel Bucretius [1600?-1631] . . . XX . . . addidit [by Francesco Valesio (1560-1648?) after Odoardo Fialetti (1572-1638)]. Folio. [3] 97ff. Engraved title-page, 97 full-page text engravings. Venice: apud Evangelistam Deuchinum, 1627. With: Spiegel, Adriaan van der (1578-1625). De humani corporis fabrica libri decem . . . Engraved title, [10], 328 (i.e., 330), [12]pp., plus final blank. Venice: apud Evangelistam Deuchinum, 1627. Bound with: Spiegel. De formato fœtu liber singularis æneis figuris exornatus . . . Padua: Apud Io. Bap. de Martinis, & Livium Pasquatum, [1626]. [8], 104pp. 9 engraved plates. Together 3 works in 1, folio. 383 x 265 mm. 18th century quarter calf gilt, vellum boards (vellum reused from an earlier binding), light wear, front cover a bit warped. Plate in De formato fœtu repaired, some marginal dampstaining on last several leaves, upper corners of first few leaves worn, but very good. Rare First Edition of the first original series of anatomical illustrations since Vesalius, Estienne, and Eustachio. Casserio and Spiegel both studied under Fabricius ab Aquapendente at the University of Padua. Both worked closely with their teacher for many years, and in 1608 Casserio succeeded Fabrici in Padua's chair of surgery and anatomy, which passed in turn to Spiegel upon Casserio's death. Casserio had been working since before 1600 on a fully-illustrated anatomical treatise; however, he did not live to finish it, leaving upon his death 86 engraved plates but no text. His successor Spiegel wrote an unillustrated treatise on anatomy that remained unpublished during his lifetime; in his will, he appointed Daniel Bucretius (né Rindfleisch) to see the work into print. To illustrate Spiegel's treatise, Bucretius obtained 77 of Casserio's original 86 anatomical plates from his heirs, and commissioned 20 more by the same artists to complete the series; the remaining 9 plates left by Casserio were used to illustrate Spiegel's De formato fœtu. "In the complete series, the largest number of plates, forty-three—and these perhaps the most memorable—are to be found in Liber IV, on the muscles. There are also interesting illustrations on the genito-urinary system in Liber VIII and on the brain in Liber X—one of these, showing the arterial circle at the brain, predates the Willis-Wren illustration [from Willis's Cerebri anatome (1664)] . . . Except for those few plates which were derived from Vesalius, the anatomists—Casserio first and Bucretius later—had reconsidered ways of presenting human anatomy. In doing so they produced the first original series of illustrations of the anatomy of the human body since Vesalius, Estienne and Eustachio" (Roberts & Tomlinson, The Fabric of the Body, pp. 262-63; see also pp. 259-61). Odoardo Fialetti, the artist who drew Casserio's and Bucretius's anatomical illustrations, was a pupil of Tintoretto and himself the author of a manual of anatomy for artists. Though a number of copies exist in institutions this work is surprisingly scarce on the market. The Ingenious Machine of Nature, pp. 167-68. Garrison-Morton.com 381. . (Inventory #: 44261)
$20,000.00 add to cart or Buy Direct from
Jeremy Norman & Co.
Share this item
Jeremy Norman & Co., Inc.
Offered by