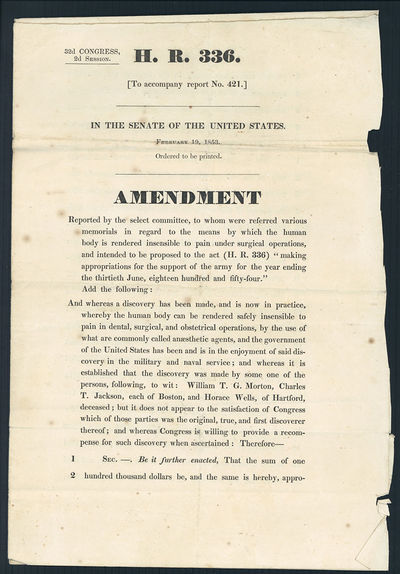 by United States. Senate. 32nd Congress, 2nd Session
Washington DC, 1853. United States. Senate. 32nd Congress, 2nd Session. H. R. 336 [To accompany report no. 421.] In the Senate of the United States. February 19, 1853 . . . Amendment . . . 3pp. [Washington, D.C.: Government Printing Office, 1853.] 297 x 205 mm. Unbound. Some dampstaining, edges a bit frayed but very good. Docketed. First Edition of this rare ether controversy document, with no copies listed in OCLC. In January 1853, responding to renewed debate over who deserved credit for inventing ether anesthesia, the U. S. Senate appointed a select committee to determine whether W. T. G. Morton, Charles Jackson or Horace Wells had the best claim to the discovery. On February 19 Senator Isaac P. Walker, the committee's chairman, submitted an amendment to army appropriations bill H. R. 336, confirming the U. S. government's right to use and benefit from the discovery and proposing an award of $100,000 to "the discoverer." The final version of the amendment, which we are offering here, also proposed that the issue of priority be decided in federal court, with Morton, Jackson and the representatives of Horace Wells appearing as defendants to prove the merits of their respective cases. The Senate ended up rejecting the amendment, leaving the question of priority unsettled for the time. Wolfe, Tarnished Idol, pp. 316-17; 330-335. . (Inventory #: 44417)
$750.00 add to cart or Buy Direct from
Jeremy Norman & Co.
Share this item
Jeremy Norman & Co., Inc.
Offered by