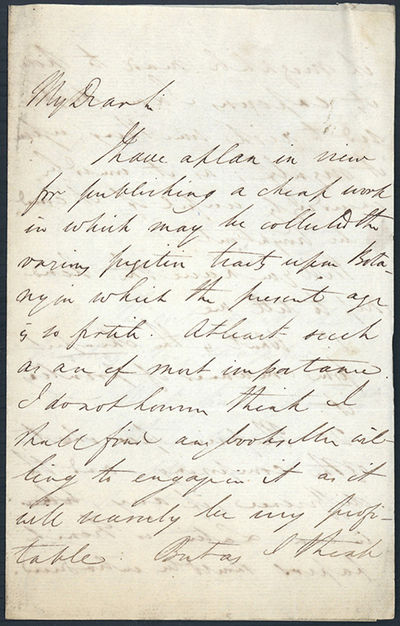 by Lindley, John
1828. Lindley, John (1799-1865). Autograph letter signed to Richard Taylor (1781-1858). 4pp. N.p., December 26, 1828. 192 x 122 mm. Minor soiling but very good. From botanist John Lindley, professor of botany at London University, longtime assistant secretary at the Royal Horticultural Society, and the foremost British expert on orchids of his day. He was the author of The Genera and Species of Orchidaceous Plants (1830-40), An Introduction to the Natural System of Botany (1830), A Systematic View of the Organization, Natural Affinities and Geographical Distribution of the Whole Vegetable Kingdom (1836) and numerous other scientific and horticultural works; he also collaborated with John C. Loudon on his Encyclopaedia of Plants (1828) and edited the Botanical Register. Lindley helped to save Kew Gardens from destruction in the 1830s, co-authoring a report recommending that the gardens be brought under control of the British government. He named and described over 100 genera of orchids and other plants, and over 200 botanical species are named for him. Lindley's correspondent was printer and publisher Richard Taylor, editor of the Philosophical Magazine and founder of the firm of Taylor and Francis; he was the publisher of several of Lindley's works. Lindley's letter to Taylor discusses the possibility of "publishing a cheap work in which may be collected the various fugitive tracts upon Botany in which the present age is so fertile . . . I do not however think I shall find any bookseller willing to engage in it as it will scarcely be very profitable. But as I think it might be made to pay its expenses, I am disposed to risk something upon it myself, as it would be exceedingly useful if it could be brought out." After asking Taylor several questions relating to printing costs, Lindley concludes by saying that the proposed work "would be intended entirely for the use of scientific men & would have nothing popular or ad captandum [captivating] introduced; its sale would, I apprehend, depend upon its cheapness so that I am anxious to make it salable at the lowest possible cost to cover the risk." Lindley's proposed project apparently was not carried out, as we can find no record of such a work in OCLC or the online British Library catalogue. . (Inventory #: 44374)
$950.00 add to cart or Buy Direct from
Jeremy Norman & Co.
Share this item
Jeremy Norman & Co., Inc.
Offered by