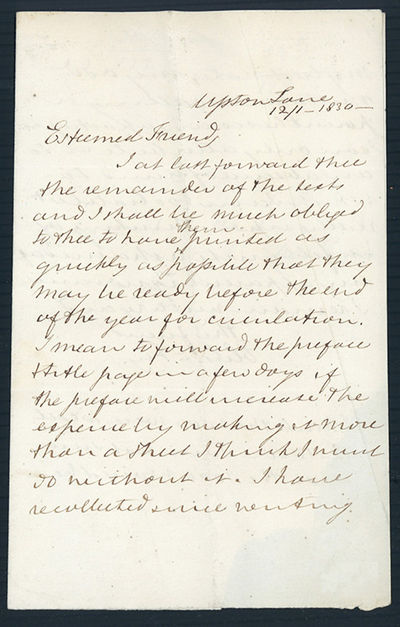 by Fry, Elizabeth
Upton, 1830. Fry, Elizabeth (1780-1845). Two autograph letters signed to Richard Taylor (1781-1858), dated 11/24/1830 and 12/1/1830 respectively. 4pp. total on 3 sheets. Upton, 1830. 230 x 187 mm.; 187 x 117 mm. Some marginal soiling, blank corner torn from address leaf of second letter, but very good. From British prison reformer Elizabeth Fry, whose tireless efforts on behalf of British prisoners led to important legislation improving the condition and administration of British prisons; in 1818 she became the first woman to present evidence in Parliament when she testified before a House of Commons committee on the state of British houses of correction. Her correspondent was Richard Taylor, publisher, journal editor and founder of the firm of Taylor and Francis. Fry's philanthropy arose from her Christian faith: A devout Quaker, she believed that the answer to all humanity's ills lay in the Bible, and to encourage reliance on the Scriptures she assembled a small volume of Biblical quotations titled Texts for Every Day in the Year; Principally Practical and Devotional (London: Hamilton, Adams & Co., 1830), which she had printed for personal distribution. The letters we are offering pertain to the printing of this work, which was done by Richard Taylor's firm at Red Lion Court in Fleet Street: "I have endeavoured to show upon half a sheet of paper my wishes for the plan of heading the texts perhaps thou cou[d]st have it done for me simply at the beginning of each month having the name put in an apostrophe thus Mo. 1st (Jany.) M 2 (Feb) . . . Afterwards I prefer the simple number the same as the days & weeks . . . [11/24/1830]. "I at last forward thee the remainder of the texts and I shall be much obliged to thee to have them printed as quickly as possible that they may be ready before the end of the year for circulation . . . I have recollected since sending my last note, my odd mistake in calling a parenthesis an apostrophe. I can only attribute it to an absence of mind to which I am too liable . . . [12/1/1830]." . (Inventory #: 44369)
$750.00 add to cart or Buy Direct from
Jeremy Norman & Co.
Share this item
Jeremy Norman & Co., Inc.
Offered by