A Capital Collection: Houghton Hall and the Hermitage -- with a modern edition of Aedes Walpolianae, Horace Walpole's Catalogue of Sir Robert Walpole's Collection 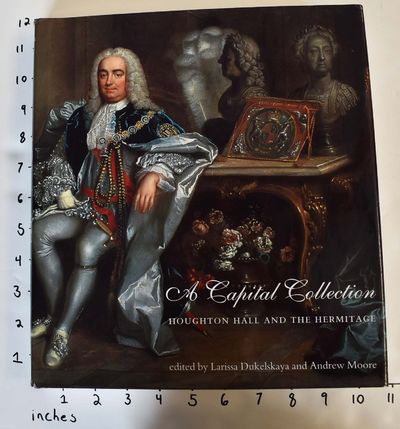 by Dukelskaya, Larissa and Andrew Moore (editors)
New Haven and London: State Hermitage Museum / Paul Mellon Centre for Studies in British Art / Yale University Press, 2002. Hardcover. VG/VG (light scuffing to block). Black cloth, gilt letters on spine, color pictorial dust jacket with white lettering,bw illustrated end pages, 500 pp., BW and color illustrations throughout. "After the fall of Sir Robert Walpole, Britain's first 'prime' minister, from political power in 1742, most of his celebrated collection of Old Master paintings was removed to his newly-built Palladian house in Norfolk, Houghton Hall. In 1779 this collection was sold by Sir Robert's grandson to the Empress Catherine II of Russia, which was seen as a scandalous loss to Britain. This book catalogues for the first time the entire collection in Russia as well as those works of art that remained at Houghton Hall. Accompanying the catalogue are essays on various aspects of the formation and sale of the collection." (dj) The main portion of the annotated and illustrated catalogue presents 274 pieces. Interesting on a variety of levels. (Inventory #: 162640)
$140.00 add to cart or Buy Direct from Mullen Books
Share this item