Picasso in The Metropolitan Museum of Art 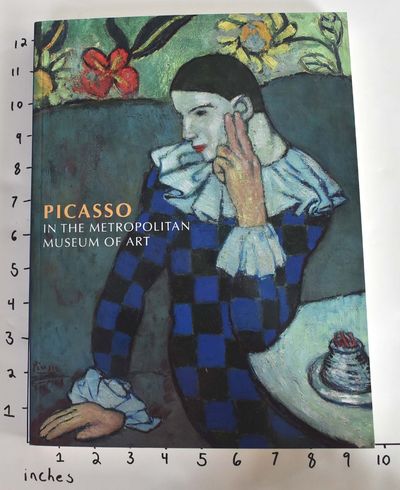 by Tinterow, Gary (Editor)
New York: The Metropolitan Museum of Art, 2010. Paperback. NF with unbroken spine; likely an unread copy.. Glossy, color-illustrated wraps with yellow/white lettering on blue spine. xi, 364 pp. with hundreds of images. Catalogue for the exhibition of the same name, April - August 2010. With essays, documentation, and technical notes by an array of specialist authors. "This volume presents for the first time a comprehensive catalogue of the works by Pablo Picasso (1881-1973) in The Metropolitan Museum of Art. Comprising thirty-four paintings, fifty-eight drawings, a dozen sculptures and ceramic plaques, and almost four hundred prints, the Museum's collection reflects the full breadth of the artist's multisided genius as it asserted itself over the course of his long and influential career. In his introduction, Gary Tinterow describes how the Metropolitan came to possess the particular works by Picasso in its collection, beginning with the arrival of Gertrude Stein's iconic portrait in 1947, the first work by Picasso to enter the Museum. Subsequent additions from the holdings of Alfred Stieglitz, Scofield Thayer, Florene M. Schoenborn, Klaus and Dolly Perls, and Jacques and Natasha Gelman, among many others, helped establish the Metropolitan as one of the worlds most important repositories of Picasso's art. In meticulously researched catalogue entries, the authors place the Metropolitan's Picassos in art historical context and discuss the significance of each work within the artist's constantly evolving oeuvre, from the early Blue and Rose Period masterpieces and revolutionary innovations of Cubism to the elegant neoclassicism of the 1920s and the joyous invention of the late work. Technical notes from Museum conservators describe the results of analyses and treatments that have revealed early states as well as previously lost compositions under the surfaces of many of the paintings. In addition, extensive provenances, exhibition histories, and references expand our understanding of the diffusion of Picasso's work in Europe and America, and its impact on criticism and art history in the twentieth century. Picasso's vast body of graphic work, which ranks in creativity alongside that of Dürer, Rembrandt, and Goya, is examined in an essay by Samantha Rippner and accompanied by checklists of the Museum's prints and ceramic plaques. In all, this important and richly illustrated publication is a fascinating look at one of the most protean artists of the recent past, proof that even an artist as well known as Picasso still has much to reveal." - from The Met's web site. (Inventory #: 162628)
$37.00 add to cart or Buy Direct from Mullen Books
Share this item