The archive of a Christian ventriloquist 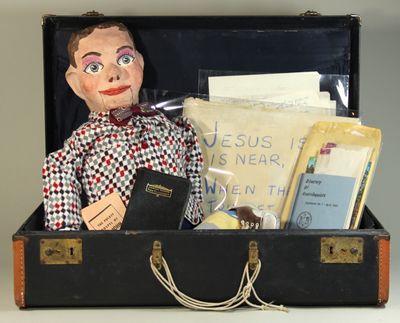 by Rea, Katheryn
[Columbus, OH, 1961. An archive of material from the Christian ventriloquist Katheryn Rea (1917-2010) of Columbus, Ohio. She and her husband James operated Jimmy Rea Electronics in Columbus from the 1950s well into the 2000s. The couple also founded the Interdenominational Drive-In Christian Film Association, which operated a long-time free Christian drive-in theatre on the west side of Columbus. The feature of the archive is "Chubby," a wooden and paper-mâché ventriloquist's dummy measuring approximately 32 inches in height, and dressed in his original home-made clothing. Also, 25 pages of holograph performance scripts and notes, ventriloquism-related publications, ephemera, and correspondence, together in a contemporary hard-shell suitcase. The story goes that Ms. Rea acquired this dummy from the noted figure builder William Kirk Brown of Miami, Florida, likely ca. 1954. (The manufacturer's pencil markings to the dummy's interior suggest he was "born" on December 23, 1953 and given the name Chubby.The near coincidence to the Nativity seems apt. Rea's scripts reference the dummy's good fortune to be delivered into a good Christian household in Ohio and out of the fleshpots of the Miami nightclubs. Rea's scripts are geared toward spreading the Good Word to children, and appear to have accompanied Saturday and Sunday evening showings at the drive-in during the 50s and early 60s. The relationship between Christian evangelism and ventriloquism, is of course not so straightforward. Ventriloquism as a form of entertainment emerged during the 16th and 17th centuries, and was generally associated with demonism or magic. But by the 1920s ventriloquism had been made suitable for the vaudeville stage, though the acts still bore the stigma of night clubs, alcohol, and the bawdy secular world. By the 1950s the taint of the bawdy associations was beginning to be scrubbed from the ventriloquist. In his Hearing Things: Religion, Illusion, and the American Enlightenment, Leigh Eric Schmidt notes in 2000: "The demonic voices and divine locutions of the old ventriloquism sounded incredibly docile once turned into an amusement. Just how safe that medium had become is indicated by the evangelical embrace of the art as an acceptable form of evangelistic entertainment ... Now 'gospel vents' have crowded onto the stage with their older vaudeville counterparts - stalwarts in a thriving evangelical subculture of entertainers, puppeteers, clowns and magicians, most of whom aim their ministries at children and youth. This convergence, with roots at least as early as the 1920s, took firm hold by the 1950s." Rae and her dummy thus stand at the apex of wholesome, Eisenhower-era, Ed Sullivanesque evangelical entertainment - delivering with a smile and a joke the once disassociated oracular voices of exhortation here transformed in such forms as a sing-along to the popular tune of the "Ballad of Davy Crockett," rewritten to teach the return of Christ: "Jesus is coming and the time is near, / When the angel's voice and the trumpet we shall hear. / He will take us up to be by his side. / And there we will ever more abide, / Jesus, blessed Jesus / We await thy call." Rea displayed the lyrics to this song in holograph on the verso of a 27" x 41" movie poster, present here in the archive. Also present is the song that leads children in marching around the Walls of Jericho to bring them down: "Oh my how did they do that - did they use an atomic bomb to knock it down?" Much of the content of Rea's act as collected here appears to be of her own creation, though the influence of popular entertainment might perhaps be discerned. When the dummy (renamed by her Johnny, or sometimes Albert) harasses the concession staff asking for pop, one easily imagines a nightclub routine in which a dummy demands booze from a bartender. That this bit also points the crowd to Rea's drive-in concession stand cannot be entirely coincidental. In all, an archive rich in visual, textual, and teaching material - standing at the intersection of 1950s popular culture and Midwestern Christian evangelical movements. (Inventory #: 52212)
$2,300.00 add to cart or Buy Direct from
rulon-miller books
Share this item

Tangled up in tapes. The recordings of Bob Dylan. Third edition

Sao Paulo : IGLU Editora , 1992
(click for more details about Bob Dylan a estrada revisitada)
View all from this seller>