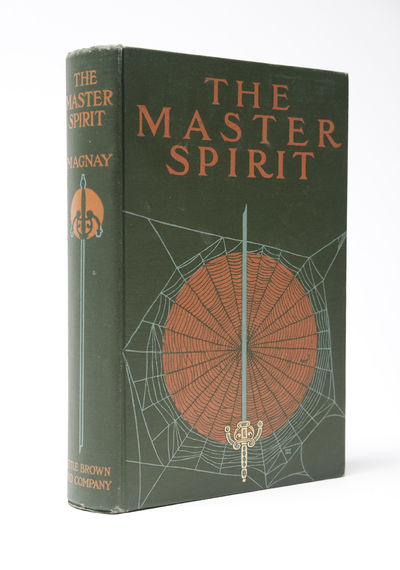 by Magnay, William
Boston: Little, Brown & Co, 1906. FIRST EDITION. Hardcover. Very good. 8vo. vi, 319, [1] pp. + 4 pp. advertisements. With a frontispiece + 1 plate by John Cameron. Bound in original green publisher's cloth designed by the Decorative Designers firm (signed with their interlocking "DD" monogram, the second D facing left); title lettered in red-orange on front cover and spine, large spider web pierced by a green sword with elaborate gilt handle. Early gift inscription on first blank dated 1914. Curious English mystery novel distinguished by the excellent American publisher's binding depicting a "spider-web" motif rendered by the esteemed Decorative Designers firm (active 1895-1931). The firm was unique in that it employed a number of designers, and each was responsible for certain aspects of a design -- an early example of division of labor in creative work. The founder of the firm was Henry Thayer (1867-1940) who was trained as an architect (following the example of Stanford White, architect and book cover designer). Thayer was responsible for much of the lettering produced by the firm, and Emma Redington Lee Thayer (1874-1973), another important woman designer, executed the beautiful decorative borders and designs. Henry Thayer and Emma Redington Lee Thayer were married in 1909 but later divorced in 1932 on the grounds of desertion. Charles Buckles Falls (d. 1960) and Jay Chambers (d. 1929) were in charge of drawing the figures featured in narrative designs. Their designs were often initially sketched by hand, then transferred to brass plates and engraved by Rome K. Richardson and Adam Empie, both of whom occasionally designed covers individually using the monograms RR and a conjoined AE, respectively. Gullans ("New Paths") described the Decorative Designers' work as original and in some cases "extraordinary." The Decorative Designers monogram appeared on over 25,000 book covers, dust jackets, and text decorations. (SOURCE: Publisher's Bindings Online). ¶ The author, Sir William Magnay, 2nd Baronet Magnay (1855-1917) was a prolific English novelist novelist who in his lifetime published twenty-five novels; a further three were brought out posthumously. ¶ While other copies appear on the market from time to time, ours is the finest we have ever seen. (Inventory #: 2291)
$350.00 add to cart or Buy Direct from
Michael Laird Rare Books
Share this item