The Byrth, Lyf, and Actes of Kyng Arthur; of His Noble Knights of the Rounde Table, Theyr Merveyllous Enquests & Adventures .. 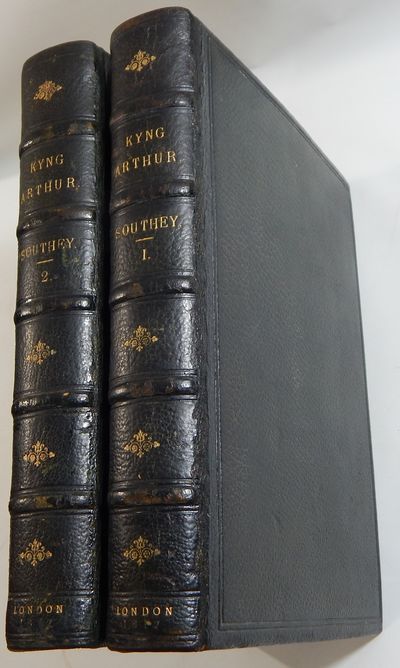 First edition with Southey's notes. Each volume with a large woodcut on the title page showing a knight and a dragon. Engraved gothic and figural initials. Contemporary binding of full near black morocco, spines in six compartments with raised bands, top edges gilt; gilt inner dentelles; marbled endpapers. Text blocks are remarkably free of the usual foxing that dogs this edition. Neat bookplates in each volume. A near fine set.

This is the ninth printing of Malory, after Caxton (1485), De Worde (1498 & 1529), Copland (1557), East (ca. 1575), Stansby (1634) and two 12mo. editions in 1816. This was the first modern text of Malory which attempted to recapture the text as it was first published by Caxton. All contemporary advertisements indicate that this edition consisted only of 250 copies with 50 copies on large paper, though there is some suggestion from notes in the publisher's books that as many as 1000 copies may have been printed. This is the regular edition, still impressive at 10 inches, and a scarce and important printing.

London : Macmillan and Co , 1889
(click for more details about Bacon)

London : WIlliam Heinemann , 1915
(click for more details about A Christmas Carol)
View all from this seller>