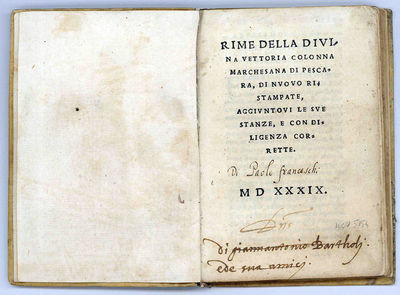 by COLONNA, Vittoria (1490-1547)
8vo (141x95 mm); later stiff vellum, ink title on spine; (47), (1 blank) ll. Italic type. Ownership's entries on the title-page: "di Paolo franceschi" and "di giannantonio Bartholi. Ede sua amicj". A very good copy.
RARE SECOND EDITION, edited by Filippo Pirogallo and by him dedicated to Alessandro Vercelli.
The edition contains the same poems as the first 1538 Parma edition (overall 145 poems including 9 by other authors), with the addition of the stanze Quando miro la terra ornata e bella by Veronica Gambara, here called Stanze aggionte and wrongly attributed to Vittoria Colonna (cf. V. Colonna, Rime, A. Bullock, ed., Bari, 1982, p. 259).
In 1539 Colonna's rhymes were also printed in Florence by Zoppino and twice in Venice (by Salvioni and allegedly by Zoppino or Troiano). These editions are easily distinguishable from the present because they bear either a trefoil or a woodcut border on the title-page. According to Bullock (op. cit.), they are slightly later since they all amend in the dedication leaf the dot wrongly placed between the dedicatee's first and last name.
The poetic production of Vittoria Colonna comprises two main features: one profane, which consists of Petrarchan poems celebrating the love for her husband, the Marquis of Pescara Francesco D'Avalos, whom she married in 1509 and who died in battle in 1525; and one sacred, in which the personal pain for the loss of her husband is transfigured and becomes more and more universal up to a point in which it coincides with the pain of Christ on the cross. If in the first editions of the Rime the spiritual feature occupies only a small part of the collection, it gradually increases over the years reaching its summit in the 1546 and 1548 Valgrisi editions, which are both entitled Rime spirituali.
"Although Colonna literary activity spanned over twenty years, her lyrics are clearly marked by a uniform maturity of style. She achieved a highly successful balance between, on the one hand, "correct" poetic language (in which she imitated Petrarch rigorously) and content (unblemished devotion to the memory of her husband); and on the other hand a perfect harmony between stylistic tension (always in search of a "high" linguistic register both in vocabulary and syntax) and an exploration of feelings (from the mourning of her husband to divine love and the contemplation of Christ), which excludes any trace of light-heartedness or lover's playfulness" (L. Panizza & S. Wood, eds., A History of Women's Writing in Italy, Cambridge, 2000, p. 38).
Vittoria Colonna was the most famous Italian poetess of his day. It was the only artist, with the only exception of Michelangelo (on whom she had a great human and literary influence), to receive in her time the attribute of "Divine". Her court soon became a circle of reformed ideas. Despite the highly intimate nature of her poetry, in it are clearly visible the religious ideas of such reformed thinkers as Juan de Valdes, Bernardino Ochino, and Reginald Pole (cf. M. Bandini Buti, Poetesse e scrittrici, Rome, 1941, I, pp. 164-171; see also F.A. Bassanese, Vittoria Colonna, in: "Italian Women Writers: A Bio-bibliographical Sourcebook", Westport CT, 1994, pp. 85-94).
The added stanze by Veronica Gambara, here wrongly attributed to Colonna, had already been printed twice, in one case with correct attribution (cf. V. Gambara, Rime, A. Bullock, ed., Florence, 1995, p. 38).
"The poet Veronica Gambara was a contemporary on the literary scene and the same age as Vittoria Colonna. Despite her role, together with Colonna and Gaspara Stampa, as protagonist in the small group traditionally labelled as the standard bearers of female Petrarchism, she has not achieved the same recognition, and has always remained a somewhat distant figure. Of the same aristocratic rank as Colonna, Gambara became Lady of Correggio in 1508 when she married Count Giberto X. She, too, was widowed quite young, in 1518, but in contrast to Vittoria, Veronica continued to be involved in the responsibilities of family and property. This fact helps to highlight the difference in their lives and their poetic choices. Gambara's verse, for example, seldom betrays a tendency to spiritual reflection. Neither before nor after her husband's death does she show herself drawn to a religious or mystical life. In fact if one compares her with Colonna, it is perhaps in this tension between her literary activity and her active life in the world that we can occasionally glimpse the frustration and dissatisfaction which cloud Veronica's polished image. Since we found in her verses serious, measured emotions which adhere to a pessimistic, Petrarchan understanding of the temporality of all things, it could be maintained that Veronica, and not Vittoria, deserves to be acclaimed as the role model, for her ability to control a language which was easily imitable, and more neutral than Colonna's own intensely expressive tone" (G. Rabitti, Lyric poetry, 1500-1600, in: "A History of Women's Writing in Italy", L. Panizza & S. Wood, eds., Cambridge, p. 40).
Catalogo unico, IT\ICCU\UBOE\103982; BMSTC Italian, p. 191; A. Erdmann, My gracious silence, Luzern, 1999, p. 211. (Inventory #: 1)
$2,600.00 add to cart Available from Govi
Share this item


(click for more details about [Carmina] ad Hieronymum Sanvitalem Salae Principem. Autograph (?) manuscript on paper. [Reggio Emilia?], first half of the 16th century)
View all from this seller>