A Feeling for Leaving 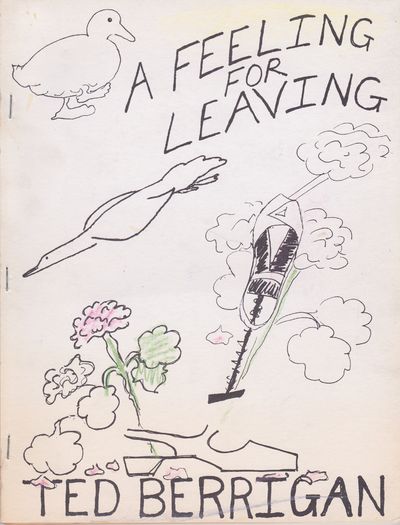 SIGNED by Ted Berrigan on the tissue guard before the title page. A collection of poems from an edition of 400 copies, 25 of which were numbered and signed by Berrigan, plus 3 hors commerce. (Although Berrigan signed this copy, it was not actually one of the 25 signed and numbered copies.) With a hand-colored cover (as issued) by Rochelle Kraut. An attractive collection of poems by one of the key members of the New York School.

This book was published by Frontward Books, which was started by Bob Rosenthal and Rochelle Kraut. According to Rosenthal, Berrigan taught him how to use a mimeograph machine when Berrigan was teaching at Northwestern and Rosenthal was attending his classes. "In all, the press published nine mimeographed books, noteworthy for their often hand-colored covers with drawings by Rochelle Kraut," according to Steven Clay and Rodney Phillips, "A Secret Location on the Lower East Side," pages 218-219. (The New York Public Library and Granary Books, 1998).

Hong Kong : [Artmatch Group] , 1997
(click for more details about Artmatch Exhibition '97)
View all from this seller>