The Hugo Gellert Anniversary Committee Invites You to Join Them on the Occasion of a Banquet in Honor of Hugo Gellert, Sunday, January 30th, 1955, 2 p.m. 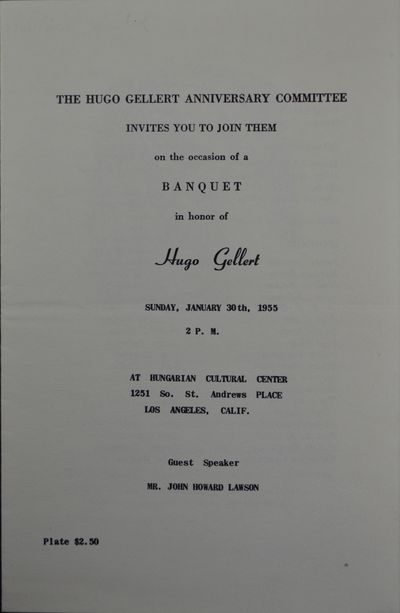 by [Gellert, Hugo] Hugo Gellert Anniversary Committee
Los Angeles: Hugo Gellert Anniversary Committee, 1955. First Edition, First Printing. Single leaf, 8 1/2 x 11 inches (215 x 280 mm), folded vertically to create [4] pages. Horizontal fold, some minor edge wear. A Near Fine copy.Invitation to a banquet honoring the great radical artist Hugo Gellert (1892-1985). Held at the Hungarian Cultural Center in Los Angeles on January 30, 1955, the banquet featured guest speaker John Howard Lawson, a playwright and screenwriter who was one of the Hollywood Ten.Inside, on page 2, there's a list of sponsors, including Paul Robeson, Rockwell Kent, W.E.B. DuBois, Pete Seeger, and many other luminaries. Page 3 features a reproduction of Gellert's portrait of Walt Whitman above a quotation from Whitman. And page 4 offers a tribute to Gellert: "For forty years the art of Hugo Gellert has been a weapon in the hands of Americans fighting for the freedom and happiness of our people."No other copies in commerce as of July 31, 2017. Nor do we locate any copies in OCLC WorldCat. RARE. (Inventory #: 1408)
$125.00 add to cart Available from Le Bookiniste
Share this item