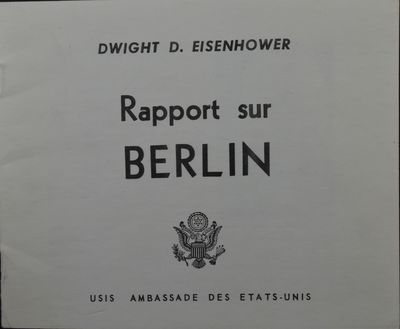 by Eisenhower, Dwight D.
[Paris]: USIS/Ambassade des États-Unis, [1959]. First Edition, First Printing. Oblong 16mo, 6 1/4 x 5 1/4 inches, (160 x 130 mm), 19, [1] pages in stapled white wrappers. Wrappers a bit soiled and showing a little edge wear, interior pages clean and bright. A Very Good or better copy.Text of an address by President Dwight Eisenhower on March 16, 1959, about the growing crisis in Berlin. French text, issued by the U.S. Information Service and the U.S. Embassy in Paris. The Soviets had demanded Western forces pull out of West Berlin, a demand rejected by the U.S., Britain, and France.In his speech, Eisenhower says that the crisis was provoked by the Soviet Union and that the West must confront Soviet imperialism. "We shall continue to exercise our right of peaceful passage to and from West Berlin," he says. "We will not be the first to breach the peace. It is the Soviets who threaten the use of force to interfere with such free passage. We are ready to participate fully in every sincere effort at negotiation that will respect the existing rights of all and their opportunity to live in peace." (Page 10, translated from the French.)OCLC WorldCat shows three institutional holdings, all in France. No other copies in commerce as of July 27, 2017. A rare bit of Cold War ephemera. RARE. (Inventory #: 1394)
$100.00 add to cart Available from Le Bookiniste
Share this item