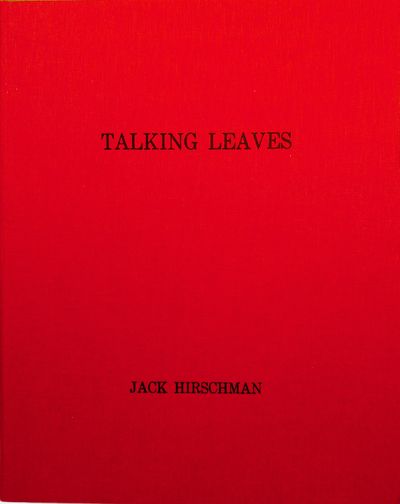 Red cloth box (12 1/8 x 9 5/8 inches; 308 x 245 mm) containing [26] loose leaves. Black ribbon attached inside the box.
SIGNED by Jack Hirschman on the title leaf. A limited edition of only 30 boxed sets featuring facsimiles of poetry broadsides produced in 1979 by Hirschman and the Union of Street Poets in San Francisco. Hirschman wrote many of the poems but he also translated the works of others, such as Vladimir Mayakovsky.

As he explains in a two-page introduction, Hirschman, artist Kristen Wetterhahn, and poet Jack Mueller formed the Union of Street Poets in December 1978. (Mueller died in 2017 and Hirschman passed away in 2021). The group made photocopies of poems in editions of 100 copies, which they gave to fellow poets and artists as well as the general public. This edition reproduces 23 of the broadsides on multicolored paper, most with striking art work by Wetterhahn.

A typically beautiful production by Soheyl Dahi and his Sore Dove Press, known for high-quality limited editions of works by poets and artists.

The Doctrine of Selective Depravity

La Crosse, Wisconsin : Juniper Press , 1980
(click for more details about The Doctrine of Selective Depravity)
View all from this seller>