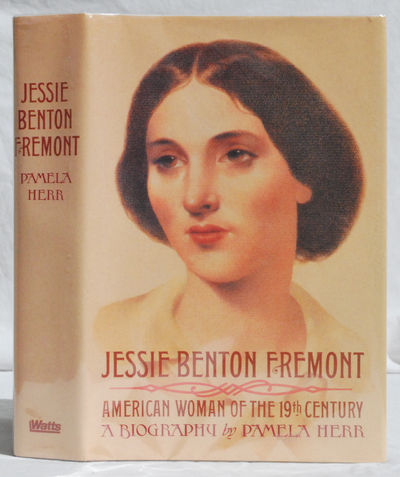 by Pamela Herr
New York:: Franklin Watts,, 1987. First Edition. Hardcover. Like New. FIRST EDITION, first printing. 8vo. 9 1/4 x 6 1/4 inches. (xvi), 496 pp. Frontispiece, bibliography, index; text clean, unmarked. Gilt-titled brown cloth spine, white paper boards, pictorial dust jacket in archival mylar; binding square and tight. Gift inscription from "Dove," November 21, 1987 on front free end-paper. Fine. Jessie Benton Fremont (1824-1902) was the daughter of the powerful U.S. Senator Thomas Hart Benton, and wife to John Charles Fremont. Outside of her relationships with these powerful men, Jessie herself was a powerful player in American politics and culture in the nineteenth century. She helped her husband write his famous travel reports which inspired so many to move West in the quest of Manifest Destiny, and during the Civil War she was his chief aide when he served as a General for the Union. Her prominence in the political sphere lent momentum to both the anti-slavery and the suffragette movements. When John Fremont's fortune and public reputation both failed, she supported their family with her own writing. This is the first full-scale modern biography of this important woman. (Inventory #: GY815-257)
$10.00 add to cart Available from
John Howell for Books
Share this item

Arkwright His Counter-Blast, to an Effusion Entitled: Panflet on the Four Basic Dialects of Pig Latin

Tujunga : R. Sacto-Hirano , 1951
(click for more details about Arkwright His Counter-Blast, to an Effusion Entitled: Panflet on the Four Basic Dialects of Pig Latin)
View all from this seller>