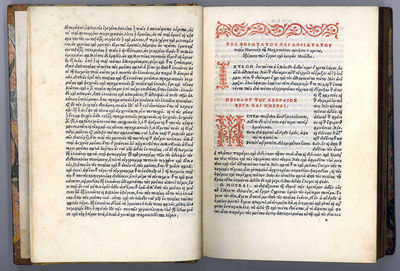 by HESIODUS (fl. 8th-7th cent. BC)-TRINCAVELLI, Vittore ed. (1496-1568)
4to (207x147 mm); 19th-century half calf, spine with five raised bands and lettered piece, panels covered with marbled paper; (4), LXXXVIII [i.e. CLXXXVIII] leaves. On the title-page device of Bartolomeo Zanetti, on l. CXII full-page woodcut depicting farm implements and agricultural tools, and with two diagrams in the text. Headpiece and initial on black ground on l. (2)r, headpiece, initials and titles printed in red on l. 1, in Byzantine style (all previously used by the Venetian printers Nikolaos Vlastos and Zacharias Kallierges, 1499-1500). Ownership's inscription on the title-page 'Gerardi Cerfolii'. A few contemporary marginal annotations in Greek. Some very light foxing and browning on the first and last leaves. A very good, crispy copy.
EDITIO PRINCEPS of Hesiodus's complete works, containing also in first edition the Scholia by the grammarian Ioannes Tzetze (written around 1135-1140) and the Allegoriae in Theogoniam by Ioannes Galenos Diakonos (9th-10th cent.).
The volume also includes the commentaries to the Opera et dies by Proklos, Ioannes Protospatarius, and Manuel Moschopoulos (12th-13th cent.). The text was edited by the physician Vittore Trincavelli, who dedicated the edition to Pietro Vettori (cf. M. Sicherl, Die griechischen Erstausgaben des Vettore Trincavelli, Paderborn, 1993, pp. 68-73).
Trincavelli, born in Venice into a family coming originally from Tuscany, studied medicine and philosophy at Padua and Bologna. In 1551 he was appointed professor of medicine in Padua. As a physician, he also distinguished himself on the field during an epidemic which struck the island of Murano. As a Greek scholar, he collaborated with Bartolomeo Zanetti editing the text of at least nine Greek editiones principes.
The present edition was considered as the most correct for a long time and was taken as a model for many subsequent editions (cf. Dibdin, Introduction to the Knowledge of Rare and Valuable Editions of the Greek and Latin Classics, London, 1927, II, p. 31).
The Works and Days was first printed in 1480 in Milan by Bonus Accursius together with Theocritus' works. The Theogony and the Schiled of Heracles first appeared in the Aldine Theocritus of 1495/96.
For Tzetze's Scholia and Diakonos' Allegoriae Trincavelli used manily a manuscript preserved in the Library of San Marco in Venice (Marc. gr. 464), copied by Demetrios Triklinios. For the commentaries by Protospatharios and Moschopoulos he employed a codex written by Georgios Tribizias (Marc. gr. 480), while the Scholia to Theogony are based on a later manuscript once belonging to the Dominican monastery of St. John and Paul (Marc. Gr. IX.6).
Edit 16, CNCE23056; Adams, H-470; R. Mortimer, Italian 16th Century Books in the Harvard College Library, Cambridge MA, 1974, no. 233; M. Sander, Le livre à figure italien depuis 1467 jusqu'à 1530, Milan, 1942, no. 3380; A.L. Simon, Bibliotheca bacchica, London, 1927, II, no. 345; S.F.W. Hoffmann, Bibliographisches Lexicon der gesammten Literatur der Griechen, Leipzig, 1839, II, p. 248; Miriobiblon, II.1, Scriptores Graeci A-H, no. 159. (Inventory #: 5)
$2,600.00 add to cart Available from Govi
Share this item