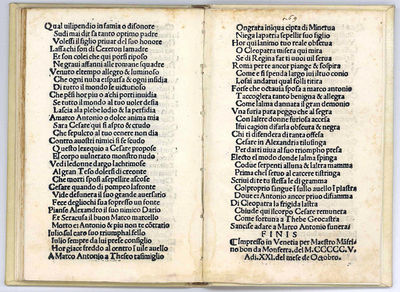 by PULCI, Luca (1431-1470)
8vo (147x97 mm); modern stiff vellum, flat spine with gilt ornaments, panels with gilt title and date and at the center the emblem Torre del Palasciano in gilt (Gozzi, Modena, 1970); (40) ll. Title-page within a woodcut border made of four different blocks (already used for a 1491 edition of Aesop). Bookplate Aldofo Tura. Ownership's inscription on the title-page faded and partially erased: "Ex lib. […] Grat.". Some marginal foxing. A nice copy.
FIRST 16TH-CENTURY EDITION (the seventh overall after the first issued in Florence by Antonio di Bartolommeo Miscomini on February 1481). During the century the work was reprinted seven more times.
The collection, dedicated to Lorenzo de' Medici, contains 18 letters in terzine freely inspired by Ovid's Heroides. But that of Pulci is not a translation or an adaptation of the Latin text, it is a completely new work in which also male characters are introduced and which does not aspire to have the thematic and historical uniformity of the original. The first letter is addressed by Lucrezia Donati to Lorenzo de' Medici (cf. S. Carrai, Imitazione e reminiscenze ovidiane nelle 'Pístole' del Pulci, in: "Le muse dei Pulci: studi su Luca e Luigi Pulci", Naples, 1985, pp. 25-34).
Pulci's Epistole (or Pístole) were extremely popular in the 15th and 16th century. In the list of books quoted in the Codex Atlanticus, Leonardo mentions Pulci's work, which was evidently one of his readings (cf. E. Solmi, Le fonti dei manoscritti di Leonardo da Vinci. Contributi, in: "Giornale Storico della Letteratura Italiana", suppl. 10-11, 1908, pp. 219 and 254).
Pulci's Epistole was a typical product of the Medici literary circles, the same that produced Burchiello's sonnets and Luigi Pulci's (Luca's brother) Morgante: i.e. the produce of an educated literature nurtured by tavern and street conversation, improvisation, popular tales, jests, epic poems and cantari.
Luca and Luigi were scions of the noble and ancient Pulci family, Guelph in tradition and supposedly French in origin. Luca, Luigi's elder brother, went to Rome to work in a bank, but fortune eluded him and he died in prison at the age of thirty-nine. He also wrote the poems Driadèo d'Amore and Ciriffo Calvanèo.
No copy in America of this edition. Edit 16, CNCE69334 (one copy at the Vatican Library); Essling, 1499 (mentioning our copy); Sander, 6007. (Inventory #: 8)
$3,900.00 add to cart Available from Govi
Share this item