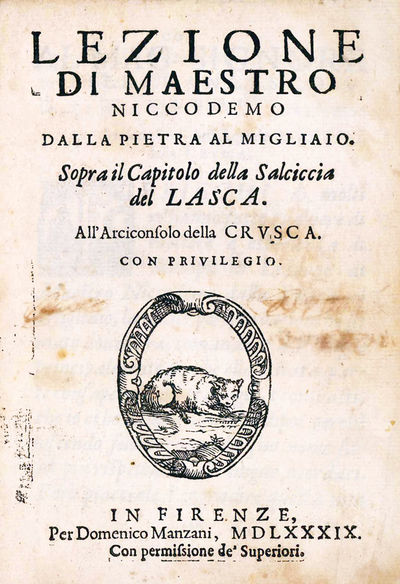 by GRAZZINI, Antonfrancesco (1504-1584)
8vo (157x108 mm); later stiff vellum, ink title on spine; 60, (4) pp. Printer's device on the title-page and at last leaf verso. Faded ownership's inscription on the title-page no more readable. Slightly browned and foxed throughout, more strongly on pp. 17-34, marginal stains in the last leaves, but all in all a good, genuine copy.
VERY RARE FIRST EDITION, dedicated by Domenico Manzani to the Archconsul of the Accademia della Crusca, Pier Francesco Cambi, of this gastronomic burlesque work in praise of the pork and sausage. The text comprises the verses of the Capitolo sopra la salciccia and an extensive commentary on it. Grazzini celebrates many different kinds of food, but comes to the conclusion that the pork meat is the finest of all and that sausage is the most delicious part of the pork, preferable to any other. He gives then the recipe for the sausage "alla fiorentina" (in Florentine style), according to him absolutely the best, and reports several entertaining stories related to the sausage, with comic and sometimes erotic effects. Finally Grazzini describes how to prepare the "pan'unto' (fried bread), which he considers superior to the trebbiano soup and to caviar (cf. A. Grazzini, Comento di Mastro Nicodemo dalla Pietra al Migliaio sopra il Capitolo della salsiccia, D. Romei, M. Plaisance & F. Pignatti, eds., Manziana, 2005, passim).
A.F. Grazzini was born in Florence in 1504. He started his literary career in the 1530s, when this work was composed. In 1540 in the house of Giovanni Mazzuoli, called Stradino, took place the first meeting of the Accademia degli Umidi, which wanted to revive the Florentine tradition of burlesque poetry. In the following years, however, with the admittance of erudite scholars like Cosimo Bartoli, Benedetto Varchi and Pierfrancesco Giambullari, the Academy was transformed into an official literary academy, the Accademia Fiorentina, in which every member was obliged to hold an academic speech on a specific subject. Therefore, in 1547 Grazzini, who had refused to comply to this new rule, was expelled from the academy to be readmitted again only two years later, in 1549. Grazzini, however, never gave up to his program of editing texts belonging to the Tuscan popular tradition. He published the Primo libro delle opere burlesche di M. Francesco Berni in 1548 and the collection Tutti i trionfi, carri, mascherate o canti carnascialeschi andati per Firenze dal tempo del magnifico Lorenzo il vecchio in 1559.
In the last period of his life Grazzini animated a new literary circle that gathered at the Giunti bookstore and which in a few years would gave birth to the famous Accademia della Crusca. In the new academy he maintained the pseudonym of Lasca and was able to keep alive the ludic and popular tradition that had previously been of the Umidi. Even after the admittance of Leonardo Salviati and the official birth in 1583 of the Accademia della Crusca, Lasca remained in his place and, while the erudite members like Salviati and De' Rossi were already working on the Dante edition that would appear in 1595, in 1583 the Academy printed the Cicalamento sopra il sonetto Passere e beccafichi magri arrosto by G.M. Cecchi, in 1584 Il Lasca dialogo by Salviati and, in 1589, the posthumous present Lezione by Grazzini (cf. D. Romei, Poesia satirica e giocosa nell'ultimo trentennio del Cinqucento, in: "Nuovo Rinascimento", URL:http://www.nuovorinascimento.org/n-rinasc/saggi/rtf/romei/cinquec.rtf, 1998, pp. 9-10).
Grazzini is also the author of several comic dramas and the famous Cene, a collection of tales that remained unpublished until the 18th century (cf. C. Spalanca, Anton Francesco Grazzini e la cultura del suo tempo, Palermo, 1981, passim).
Edit 16, CNCE21687; BMSTC Italian, p. 370; D.B.I., LIX, p. 34. (Inventory #: 11)
$2,800.00 add to cart Available from Govi
Share this item