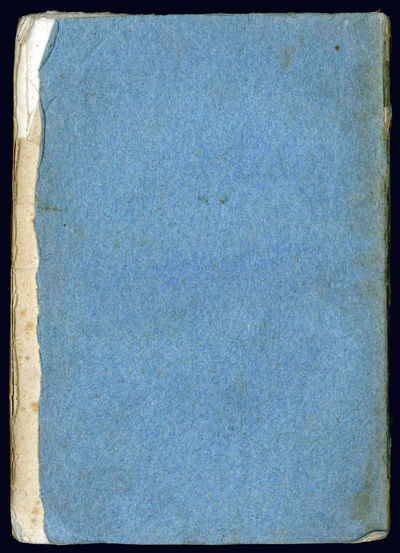 by NARDI, Luigi (1777-1837)
8vo (209x144 mm); contemporary wrappers (small losses to the spine); (2), XVI, 134, (2 blank) pp. A nice copy. Uncut.
SECOND AUGMENTED EDITION. Before the title-page is a Notice (not described in ICCU) which mentions the first edition printed in Rimini in 1813. The name of the author is given only under the form of an anagram, Giri di Luna, in the dedication at p. III.
This work by the canon from Savignano Luigi Nardi, though written as a "cicalata" (entertaining ludic poem) for the marriage of Carlo Ridolfi from Verona to Madonna Rosa Spina from Rimini, represents a real treatise on the history and art of making the porchetta (roast pork). According to Nardi, the only true porchetta is that traditionally made in Romagna, the author's region, which has nothing to do with that produced in Naples or Bologna.
Nardi then refers that in the ancient Rome cuisine with "porcus troianus" was meant a pork stuffed with various meats, which once on the table was opened, often in a spectacular way, to release the precious content, as in the famous Homeric episode of the Trojan horse (cf. L. Bartolotti, La porchetta, sapori di storia e di tradizione, in: "Porcus troianus: la storia della porchetta in un trattato dell'Ottocento", facsimile reprint of the present edition, Rimini, 2006).
Catalogo unico, IT\ICCU\SBLE\006492; B.I.N.G., 1338; Westbury, p. 158. (Inventory #: 13)
$800.00 add to cart Available from Govi
Share this item


(click for more details about [Carmina] ad Hieronymum Sanvitalem Salae Principem. Autograph (?) manuscript on paper. [Reggio Emilia?], first half of the 16th century)
View all from this seller>