A STEVENSON LIBRARY CATALOGUE OF A COLLECTION OF WRITINGS BY AND ABOUT ROBERT LOUIS STEVENSON FORMED BY EDWIN J. BEINECKE ... 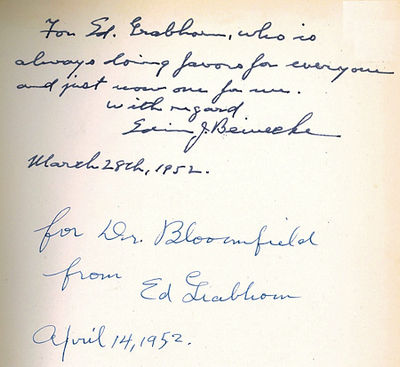 by [Stevenson, Robert Louis]: McKay, George L. [compiler]
New Haven: Yale University Library, 1964. Six volumes. Large, thick octavos. Blue cloth, lettered in gilt, t.e.g., others untrimmed. Frontispieces, portraits, facsimiles (including tipped-in facsimiles). Mild tanning at edges, otherwise very good to near fine set, First editions, each volume one of 500 copies printed after a design by C. P. Rollins. Inscribed on the free endsheet of the first volume: "For Ed. Grabhorn, who is always doing favors for everyone and just now one for me. With regards Edwin J. Beinecke. March 28th, 1952." Below Beinecke's presentation inscription appears an inscription by Grabhorn, executed shortly after his receipt of this volume: "for Dr. Bloomfield from Ed Grabhorn April 14, 1952." The Grabhorns, of course, were associated with a number of printed pieces of Stevensoniana, and in the lower margin of the page printing items 734 and 735, Beinecke has noted: "The two above items printed by the Grabhorn Press E.J.B." The authoritative monument to Beinecke's collecting, featuring detailed annotations and descriptions of over 8000 printed books, manuscripts, letters, pamphlets and association items. (Inventory #: WRCLIT78224)
$500.00 add to cart or Buy Direct from
William Reese Co. - Literature
Share this item